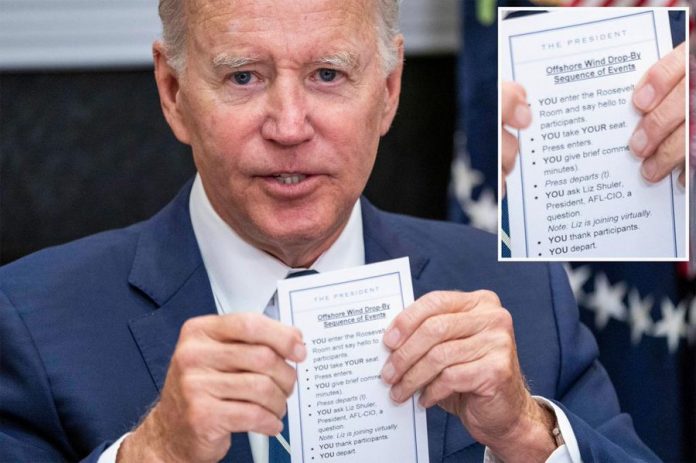 During a White House function, America’s puppet president was seen reviewing a very detailed list of instructions, including “YOU take YOUR seat,” in what may be the oddest and most unsettling moment of the Biden presidency so far.

During a meeting with wind energy executives, Biden unintentionally revealed a portion of the revealing script, prompting a photographer to take a picture.

The directions began with, “YOU enter the Roosevelt Room and say hello to participants,” and guided Biden through each phase of the event.

Then, Biden was told “YOU take YOUR seat” and was reminded to give “brief” comments.”

After then, he was instructed” YOU ask Liz Shuler, President, AFL-CIO, a question.” Finally, Biden was directed, “YOU thank participants” and “YOU depart.”

The 79-year-old Biden has frequently hinted at being controlled, and his aides have a propensity to edit Biden’s remarks, which has allegedly incensed the president. The most concerning instance was when Biden advocated for the overthrow of Vladimir Putin, only for his managers to later recant their remarks.

Perhaps the clearest picture of the truth about Biden’s ponderous, ludicrous farce of a president the public has yet seen is a cheat sheet directing him what to do, down to the movements of his physical body.

There have always been concerns about Biden’s capacity for thought. On the campaign trail in 2020, he was infamous for getting lost, and his opponent Donald Trump mockingly referred to him as a puppet.

His friends in the media and the Democratic party have now started gingerly addressing the elephant in the room as the economy collapses and the populace rejects Biden’s inadequate leadership.