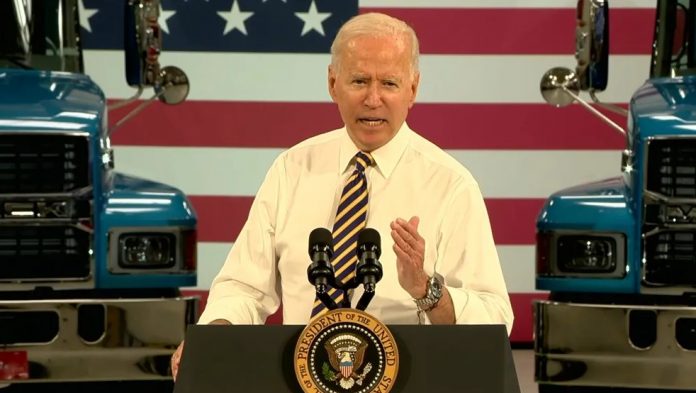 The United States of America continues to find President Joe Biden a complete embarrassment. The president spoke on Wednesday about American manufacturing during a speech in Allentown, Pennsylvania.

Biden misunderstood former Presidents Barack Obama For Donald Trump when he was talking about the 2009 recession. Biden claimed that his slip, which many believe is due to dementia or mental decline, was only a “freudian” slip. How can you forget with whom you served for eight years?

“Back in 2009, during the so-called ‘Great Recession,’ the President asked me to be in charge of managing that piece – then-President Trump – excuse me, Freudian slip – that was the last president – he caused–anyway, President Obama when I was Vice President,” said Biden.

In Recent weeks we have seen Biden’s mental decline on full display. Biden claimed bizarrely that he was a member of the Judiciary Committee “150 Years ago” during a speech in East Room before signing the “Crime Victims Fund Act.”

This is quite a remarkable development considering that if true, it would make Biden, the oldest person in modern-day history. Biden’s claim doesn’t seem to be true, as his birth records show that he was born November 20, 1942.

“Way back 150 years ago when I was chairman of the Judiciary Committee we spent a lot of time…” Biden said during the event.

If you haven’t seen it yet check below:

NOW – Biden says he was on the Judiciary Committee “150 years ago”pic.twitter.com/YUSlWjAAKO

Biden has been a total embarrassment to himself and the American people in recent weeks. During a CNN town hall event on Wednesday, Biden spewed word salad for a full 40 seconds while the crowd sat there in stunned silence.

“Just like the other question that’s illogical…and, I’ve heard you speak about it, because you alway-, I’m not being solicitous, but you’re always straight up about what you’re doing. The question is whether or not we should be in a position where, um, you uh, why can’t the…the…the experts say, we know that this virus is in fact, uh um, it’s going to be, excuse me, we we know why all the drugs are approved but permanently approved,” Biden said.

Check This Last Video Out:

“I’m the Democratic Party; I am president. So is the Speaker of the House and so is the, the Majority Leader,” Biden hammered. “We are not the defunding the police.”

“Okay,” a reporter said. “And are there people who — in the Democratic Party, who want to defund the police?”

“Are there people in the Republican Party who think we’re sucking the blood out of kids?” Biden bizarrely said.

“Our cities are EXPLODING with drugs & violence because of Democrat ‘defund the police’ policies and the GREAT UNITER Joe Biden deflects to talk about ‘sucking blood out of kids,’” Jackson tweeted. “He’s completely LOST it! Needs a cognitive exam NOW!”