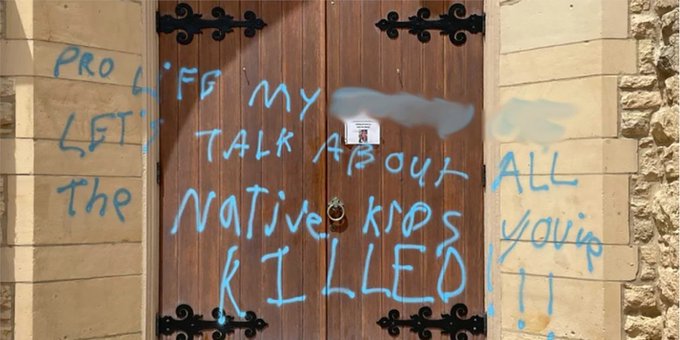 The Madison Police Department reported that abortion-related graffiti was written on a church in Madison, Wisconsin.

According to the authorities, anti-life and anti-police sentiments were spray painted over the St. Bernard Catholic Church’s front entrance on Sunday.

Photos indicate that the graffiti statements made references to the murder of Native American youngsters and used foul language.

Michael Radowicz, a pastor at St. Bernard, said in a statement, “St. Bernard Parish is saddened over the graffiti on the front of the church. We understand people’s anger over the recent ruling by the Supreme Court, but this does nothing to solve any issues. We join in prayer for those who did this, so that the Lord may heal their hearts. An investigation is ongoing with Madison Police.”

The police claimed that investigators are enticing anyone with knowledge about the event to come forward and are providing a monetary prize for any leads that lead to an arrest.

Similar vandalism in Virginia resulted in threatening graffiti and shattered glass at a Lynchburg pro-life facility.