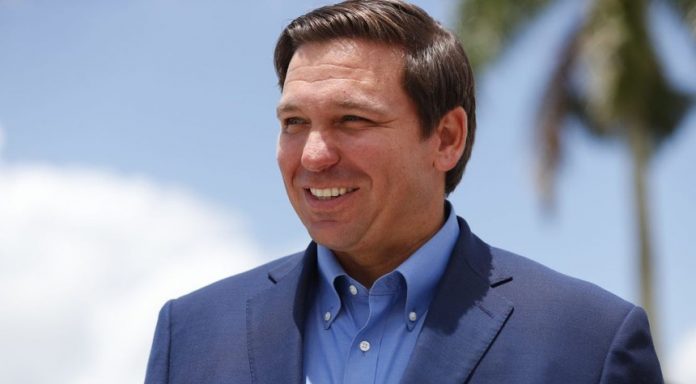 Florida Governor Ron DeSantis was one of the governors who immediately came out after Joe Biden announced his unconstitutional vaccine mandate plans and said no, we will not comply, and we will stop your illegal actions, to Biden.

DeSantis was not done yet with Biden. He was asked at an event about Biden making an oblique reference to him during the announcement about his vaccine mandate plans.

DeSantis attacked Biden for his unconstitutional actions that threatened the jobs of Floridaans, saying that he would stand up for them to protect their jobs from Biden’s federal overreach. DeSantis also criticized Biden’s desire to remove parents’ rights and allow school boards to force 5-year-olds into wearing masks every day.

“Here he comes from Washington, D.C., instituting an unprecedented mandate, even his own people acknowledged is unconstitutional,” DeSantis declared. “That’s not leadership. And the the problem I have with Joe Biden is – this guy doesn’t take responsibility for anything. He’s always trying to blame other people. Blame other states.”

“This is a guy who promised when he ran for president that he was going to shut down the virus,” DeSantis said. Then he eviscerated Biden, “If you look now, there’s 300% more cases in this country today than a year ago when we had no vaccines at all. So his policies are not working.”

“He’s doubling down on things that are going to be very destructive for the livelihoods of many, many Americans and obviously going to be disruptive to our constitutional system and the rule of law. And so, these are times, you believe in that Constitution, you gotta stand up. And obviously, the substantive issue is important, because there are places that are going to toss aside people – they’ve worked this whole time throughout COVID. Now, all of sudden, they should be tossed aside? They were working when nobody had vaccines. You don’t know their history. You don’t know why they’re making the decisions they are making.”

DeSantis brought up an important topic that Biden has completely ignored — natural immunity.

“Many of these people have already recovered and they have immunity. The idea that somehow you have someone that gets a Johnson and Johnson vaccine can work, but someone who has natural immunity somehow can’t? That natural immunity is strong. So, it’s not based on science.”

DeSantis took on the dictatorial nature Biden’s speech, and the negative effects that mandates would have.

DeSantis said it in less than three minutes, which is hard to do. This is why DeSantis has so much promise. He cuts through all the b.s. Getting to the core of the matter.