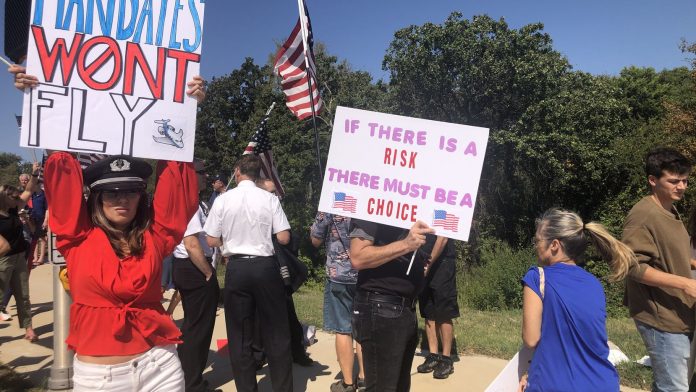 In recent months, American workers in various industries have been protesting the COVID-19 vaccination mandates.

According to reports, a large number of American Airlines employees protested against the company’s vaccination requirements this week.

Fox Business reported that hundreds of former and current employees protested outside the Fort Worth headquarters of the company on Friday.

Many protestors were seen carrying anti-mandate signs. Chants could also be heard from the crowd. Some participants shouted “Freedom over Force”

One protest organizer explained that the demonstration was not solely motivated by the effect of the mandate on employees but also to stop similar requirements from being imposed upon the airline’s customers.

“We are leading the way in this fight because it doesn’t end with us,” the individual said. “Passengers are next.”

American Airlines is not the only company in the industry to support President Joe Biden’s recommendation that all employees be vaccinated with COVID-19. American Airlines has allowed its employees until November 24 to get fully vaccinated, or they could be terminated.

“Now you’re requiring me to take it”

Friday’s protest was the second of its kind since Oct. 7, when the mandate was announced. Several employees also filed lawsuits against the airline.

Some airlines have decided to relax their vaccination mandates in response to the growing backlash. Some airlines indicated they would make accommodations for people who have not been vaccinated by that deadline.

Southwest on the other hand made headlines this week by confirming it will not fire employees who have not received the vaccine. This revelation was made after major delays and cancellations that affected travelers all over the globe earlier in the month.

Airlines face a serious problem when unvaccinated workers are fired or forced to quit their jobs.

A few days before American Airlines’ protest, many General Electric employees demonstrated outside a South Carolina corporate location. Shannon Harrill, a long-time employee, declared that she was an essential employee throughout the entire COVID pandemic. We were told to be there or lose our jobs. You’re now requiring me to accept it in order to remain here.