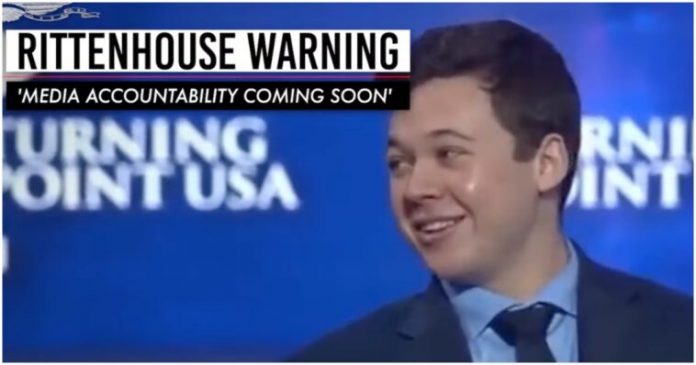 Kyle Rittenhouse will never be able to return to his previous life. especially given how he’ll be continually chastised by the leftist press, he will not really stand a chance.

Given how historically violent and antagonistic far-left radicals have been against anyone with a different perspective, the entire idea that he even contemplated attending college in person shortly after being acquitted is nearly a head-scratcher.

At the end of the day, let’s hope Kyle goes after these MSM thugs with a vengeance.

Kyle Rittenhouse, the Wisconsin youth acquitted of two fatal shootings in 2020, is warning the media that he may file potential litigation.

Rittenhouse, 18, stated “accountability is coming, I’d be on the alert” during a conservative conference held by Turning Point USA on Monday, started drawing applause from the audience, according to the Arizona Republic.

Rittenhouse, suggested Monday that lawsuits could be filed against media outlets for how they covered his murder trial amid the pomp and circumstance for an 18-year-old who had the crowd chanting his name. Kyle Rittenhouse was the one who was accused of shooting and killing two men and injured another during mass protests against police violence in August 2020,

Rittenhouse did not name any media outlets that he may sue or provide any examples of claimed defamation, and he has not filed a lawsuit against one. Early Tuesday, his attorney and a family representative did not reply to queries.