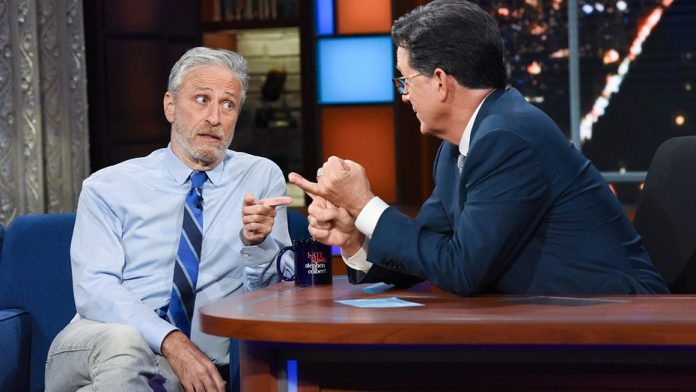 Stephen Colbert had his first live show since the beginning of the pandemic with a completely vaccinated audience along with his buddy, Jon Stewart, as his guest.

However, Stewart caused a liberal collapse by going all-in on the Wuhan laboratory escape concept in a rant that has been a part serious and part exceptionally funny.

“So, I will say this,” Stewart said. “And I honestly mean this. I think we owe a great debt of gratitude to science. Science has, in many ways, helped ease the suffering of this pandemic, which was more than likely caused by science.”

Stewart joked about the concept that the virus naturally evolved through animals. “Uh, a pangolin kissed a turtle? …Maybe a bat flew into the cloaca of a turkey and then it sneezed into my chili and now we all have coronavirus?”

He made the point of this interesting coincidence that the location of origin of this virus would be close to the lab looking into these things. “There’s been an outbreak of chocolatey goodness near Hershey, Pennsylvania, what do you think happened? I don’t know, maybe a steam shovel made it with a cocoa bean? Or it’s the f**king chocolate factory!”

Colbert then attempted to say it was a conspiracy theory by attacking Sen. Ron Johnson (R-WI). “And how long have you worked for Senator Ron Johnson?”

But Stewart was not having any of it,”This is not a conspiracy!” He also went on to state that sometimes scientists do not know when to stop,”I love them and they do such good work but they are going to kill us all.”

Naturally, had a real scientist said this only a month before, he’d have been quieted and booted off social websites. President Donald Trump, scientists, and other officials raised this, but they were treated as though this was a conspiracy theory and ignored.

Now, Jon Stewart is opening the door to critical thinking on liberal media. Let us hope he opened some thoughts.

However, some on the left are still refusing were upset with him for pushing a”conspiracy theory.”

Check out this crazy spin on reality from the Independent.

What made this a “conspiracy theory?” Simply the Democratic story since Trump mentioned it. It was never not a concept and it was never debunked. Liberal media just refused to accept that the evidence which suggested it until lately. But imagine trying to push that it’s being looked into because of Joe Biden’s”calls” for a transparent investigation. That is truly the twilight zone. Biden is the person who shut down the State Department investigation to the concept and literally had to be pressured into accepting that it needs to be investigated. He refused to assist Congressional inquiries.

But great for Jon Stewart since this is exactly what political humor is supposed to do: be humorous, push the envelope, and increase things that make you think.