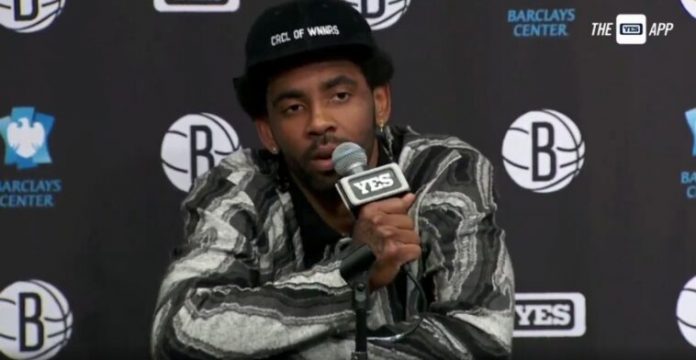 Kyrie Irving has returned to playing home games in Brooklyn, which is home to the Nets and some of the country’s most absurd Covid regulations.

Irving gave an inspirational defense of his decision to continue his opposition to being forced to get vaccinated for Covid against his will during a news conference.

“The point of this season for me was never to just take a stand. It was really to make sure that I’m standing on what I believe in — in freedom. I don’t think that’s a word that gets defined enough in our society, about the freedom to make choices, whether that carries over into nuances of our society that politicians control, the government controls or things people that empower the powers may be, right, that control,” Irving stated.

“And if I get tarnished, you know, in terms of my image and people try to slander my name continuously because, you know, those2“`q aren’t things that I forget. You know, I haven’t forgotten anything that anybody said. I don’t read everything, but I definitely read some things that put my family’s name in a position that I believe are unfair. I’ve been discriminated against,” he continued. “You know, people have said things that have been biased, they’ve, they’ve gone against their own morals. And where we live in today, I have such a strong, moral code of just being honest, being truthful, following God’s guidance, God’s guidance, and just living with the results. But in terms of that, that’s selfless. I’m a servant. So I’m comfortable being in that position,” he continued on.

It’s difficult to imagine Kyrie Irving sending a message that is more unselfish and principled than that. Unlike many of his detractors, Irving not only talked the talk but also walked the walk. For what he believed in, he risked his livelihood. For refusing to join the mob mentality that characterized much of America’s totalitarian and ineffective Covid response, he faced sanctions, ostracism, and even league vengeance.