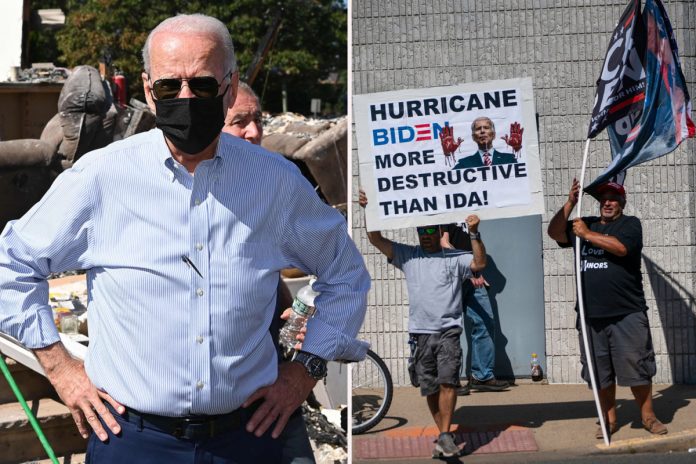 Joe Biden once again makes headlines over Afghanistan’s deteriorating situation. Biden visited New Jersey to assess the damage caused by recent storms. He was met by angry patriots. This is surprising considering New Jersey is a blue state. However, the crowd shouted at Biden that he was a dictator and that he should resign. They also called him out for abandoning Americans in Afghanistan and their allies.

They’re not wrong either. Biden did leave America behind, and the State Department is more concerned with protecting Biden’s image that they are helping our people and those interpreters who risked the lives of our soldiers. We can sympathize with these people and their frustrations.

This Is What The Daily Wire reports:

Matt Arco, a reporter for The Star-Ledger, tweeted that individuals also allegedly yelled at Biden, “Biden go home,” “you should resign,” “f***ing tyrant,” and “this country is going to s**t.”

The comments come after a report from CBS News and remarks from Rep. Michael McCaul (R-TX) over the weekend, which said that the Taliban was preventing flights from leaving Afghanistan. The flights were supposed to be carrying American citizens, green card holders, and Special Immigrant Visa (SIV) applicants. Both the congressman and CBS News claimed that the situation was effectively a hostage situation.

McCaul and Chris Wallace discussed six planes that were filled with American and allied personnel and are not being allowed to depart. McCaul asserts that the Taliban are blocking the planes from taking off. This is a hostage situation in which the Taliban can demand money or acknowledge that the United States government has legitimate control over Afghanistan.

It is difficult to try and understand the country’s current situation. While they attempt to sort out the situation, we don’t have any military personnel to help us. It’s impossible to trust anyone’s account of what’s going on. There are many conflicting reports. This one, for example, states that the Taliban are responsible for keeping Afghan citizens, interpreters, and visa-holders in Afghanistan. McCaul clearly states that there is a hostage situation.

On the same day as the Chris Wallace interview, a second report blaming Biden’s State Department was published.

This Is What Fox News reports:

Rick Clay, who runs the private rescue group PlanB, told Fox News that the State Department is the only thing preventing the flights he’s organizing from leaving Afghanistan.

Two other American individuals separately involved in evacuation efforts, whom Fox News is not naming to avoid jeopardizing ongoing rescue efforts, similarly said that the State Department is the sole entity preventing their charter flights from leaving Afghanistan.

“This is zero place to be negotiating with American lives. Those are our people standing on the tarmac and all it takes is a f—ing phone call,” one of those individuals, who has been integral to private evacuation efforts from Afghanistan, told Fox News.

“If one life is lost as a result of this, the blood is on the White House’s hands. The blood is on their hands,” that individual said, adding: “It is not the Taliban that is holding this up – as much as it sickens me to say that – it is the United States government.”

Although it’s been repeated many times, the truth is that Bloody Biden is in serious trouble due to his reckless, negligent, and incompetent actions. He cannot get the media to pay attention to a win when there are multiple reports. It doesn’t really matter which one of these reports is more accurate. It doesn’t matter whether one or both turn out to be true. It’s Biden’s fault in the end. While he may not be able to see it, his administration does.

They are aware that they can cost lives. They are aware of their mistakes. I wouldn’t be surprised if they didn’t take the blind man out and keep him from the public eye for a while. Particularly if true patriots continue to show up to call him out for his poor handling of almost everything he gets into.