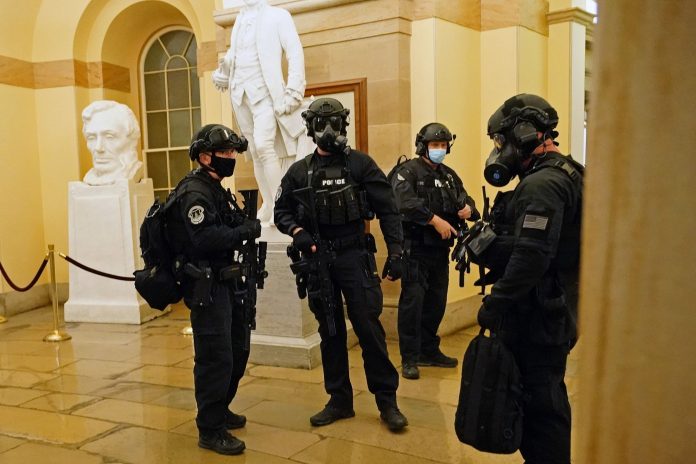 Visitors and staff refusing to wear masks on the House side have been directed to be arrested by the Capitol Police.

Details of the order were tweeted by Rep. Kat Cammack, R-Fla., who obtained a copy of the memo distributed at Thursday’s morning roll call from an unnamed police officer, according to Fox News.

She tweeted: “In today’s edition of (House Speaker Nancy) Pelosi’s abuse of power, Capitol Police have been directed to arrest staff and visitors to comply with her mask mandate for vaccinated individuals. For Members, they advise not arresting but “reporting Members to SAA (sergeant-at-arms) for their failure to comply.”

In her tweet, she included a copy the arrest memo.

The memo from Capitol Police Chief Thomas Manger said: “If a visitor or staff members fails to wear a mask after a request is made to do so, the visitor or staff shall be denied entry to the House office buildings or House-side of the U.S. Capitol. Any person who fails to either comply or leave the premises after being asked to do so would be subject to arrest for unlawful entry.”

Cammack stated to Fox News that she has spoken with police officers who feel “very uncomfortable” about this order.

“This is such an overstep of Speaker Pelosi’s authority to basically make our Capitol Police arrest staff members and report on members [of Congress],” Cammack said. “It’s absolutely unconscionable that this is where we’re at.”

Attending Physician Brian Monahan Tuesday night reimposed a mask-wearing requirement for lawmakers and all others while they are on the House floor, and in hallways and offices, according to Bloomberg News.

“For all House office buildings, the Hall of the House, and House Committee meetings, wearing of a well-fitted, medical grade, filtration face mask is required when an individual is in an interior space and other individuals are present,” Monahan said in a memo.

He wrote: “To be clear: Pelosi is directing police to ARREST vaccinated people who aren’t wearing masks. This isn’t about science — it’s about power and control.”