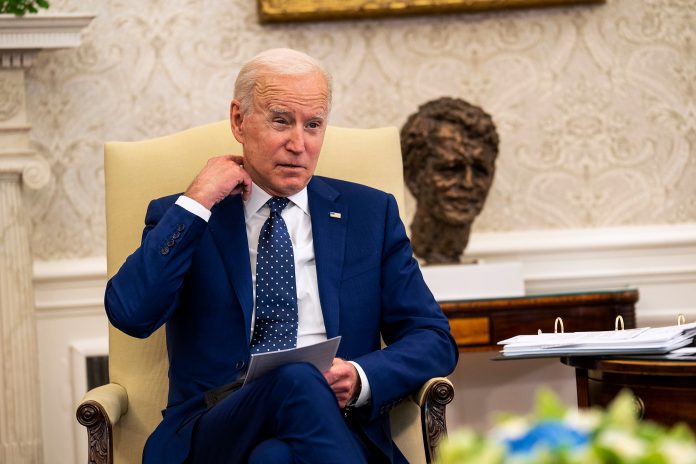 Fewer than 40 percent of likely voters believe Joe Biden is carrying out the duties of the presidency, according to a poll released Friday as the US evacuation of Afghanistan continues to spiral out of control.

The survey from Rasmussen Reports found that just 39 percent of respondents thought that Biden was “doing the job of president,” while 51 percent answered that “others are making decisions” for the 78-year-old, and 10 percent said they were not sure. That represents a drastic drop from a similar poll conducted in March, when the response to that question was evenly divided 47-47.

In addition, 52 percent of respondents said they were “not confident” that Biden was physically and mentally up to the job of being commander-in-chief, compared to 46 percent who said they were.

After Biden attempted to defend his decision not to withdraw US combat troops from Afghanistan in an address from The East Room of White House, the 1,000-voter phone and online poll was conducted Wednesday and Thursday.

In those remarks, Biden claimed his hands were tied by a cease-fire agreement forged by his predecessor, Donald Trump, and accused Afghan military and political leaders of being unwilling to fight the Taliban before belatedly admitting that “the buck stops with me.” After a brief sojourn to Camp David, Biden returned to the East Room Wednesday to deliver remarks about the COVID-19 pandemic, but did not take any questions about Afghanistan from the assembled press corps.

On Thursday, the president walked out of his office. He chaired a meeting with his national security team in the morning, but did not make any public statements on the deteriorating situation. Biden did, however, find time to meet with congressional Democrats to discuss his domestic spending agenda.

On Friday, Biden came to the East Room a third time to discuss the evacuation of thousands of Americans and their Afghan allies.

“We know of no circumstance where American citizens are carrying an American passport and are trying to get through to the airport, but we will do whatever needs to be done to see to it they get to the airport,” stated Biden, contradicting reports and statements on the ground.

After being pressed by a reporter, the president revised his statement.

“To the best of our knowledge, the Taliban checkpoints, they are letting through people showing American passports,” Biden said. “Now, that’s a different question when they get in the rush and crowd of all the folks just outside the wall near the airport. That’s why we had to — I guess it was yesterday or the day before — we went over the wall and brought in how many? 169 Americans.

“So, it is a process to try to figure out how we deal with the mad rush of non-Americans, those who didn’t help, those who are not on a priority list..”

Biden originally was to go home to Delaware on Friday night. However, he changed his plans to stay at the White House. Biden did not say whether he would travel to Wilmington later in Saturday.