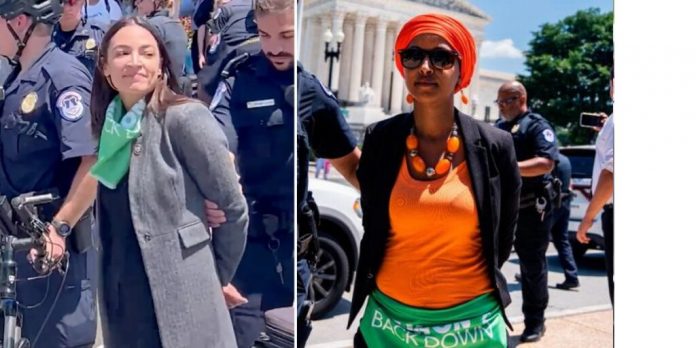 Tuesday saw a dramatic protest at the Supreme Court that included 16 Democrats, including Sandy Cortez and the extremist Rep. Ilhan Omar. Both Cortez and Omar appeared in the Democratic-led play for cameo roles only to be taken away in phantom handcuffs.

On Tuesday, 16 Democrats, including Sandy Cortez and the extremist Rep. Ilhan Omar, staged a theatrical protest outside the Supreme Court. Both Cortez and Omar appeared for cameo roles in the Democratic-organized play but were then escorted away in plain sight.

It’s important to keep in mind that everything about this ridiculous act of fake civil disobedience, which was supported by play-acting Feds, was manufactured.

Before the arrests, Jeremy Slevin, Ilhan Omar’s communications and strategy adviser, who was also detained with the Democrats, revealed the ruse.

“Members of Congress, including Ilhan Omar will be participating in a civil disobedience at the Supreme Court, potentially including arrests, shortly. 1 PM ET/12 PM CT,” Slevin said in a tweet.

The fact that there are no mugshots associated with the arrests is noteworthy. There were no handcuffs present. Thus, it appears that the Capitol Police are involved in a Democrat propaganda operation. These are the same Capitol Police that were instrumental in the security blunder on January 6, especially with their readiness to let demonstrators in and just watch as the Capitol building was swamped.

The extreme Democrats are now so arrogant that they publicly brag about staging arrests before they actually conduct them. Informing the audience beforehand that it’s all just one huge performance is the height of propaganda.