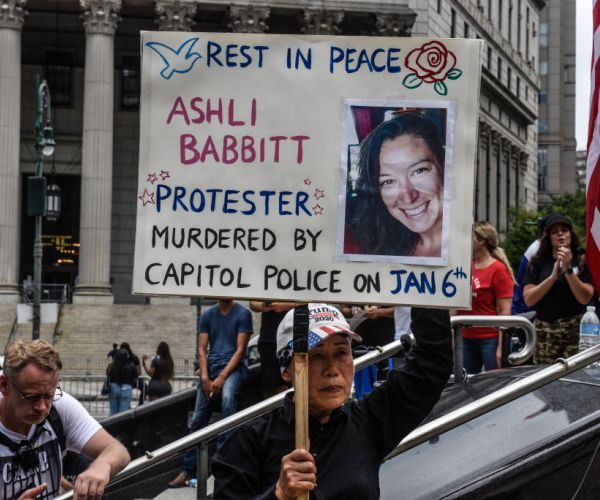 Donald Trump, the former President, is asking the Department of Justice for a reopening of the investigation into the police-involved shooting of Ashlibabbitt during the Jan. 6, riot at the U.S. Capitol.

Trump sent a video message to Babbitt’s relatives over the weekend, as they celebrated her 36th birthday. He praised Babbitt for being a “truly amazing person.”

The video was recorded at the Freeport, Texas event “Texas Loves Ashli Babbitt Rally” and tweeted Sunday from Ford Fischer. Trump’s comments begin at the 1:56 mark.

“To Ashli’s family and friends, please know that her memory will live on in our hearts for all time,” Trump said.

Babbitt was also recalled by the former president as having served 14 years in the Air Force. He noted that she was a security airman and then a senior airman. He said, “She defended our country overseas including in Iraq to fight for the war on terror.”

Recalling her “tragic” death “that horrible day of January 6,” Trump wished her a happy birthday, and said that he’d spoken to both her husband and her mother.

“There was no reason Ashli should’ve lost her life that day. We must all demand justice for Ashli and her family,” Trump stated.

“So on this solemn occasion as we celebrate her life, we renew our call for a fair and nonpartisan investigation into the death of Ashli Babbitt. I offer my unwavering support to Ashli’s family and call on the Department of Justice to reopen its investigation into her death on Jan. 6,” he said.

Lt. Michael Byrd was the officer who shot Babbitt during an NBC News interview that took place in August.

“I know that day I saved countless lives,” Byrd said. “I know members of Congress, as well as my fellow officers and staff, were in jeopardy and in serious danger. And that’s my job.”

“I tried to wait as long as I could,” he told NBC News. “I hoped and prayed no one tried to enter through those doors. But their failure to comply required me to take the appropriate action to save the lives of members of Congress and myself and my fellow officers.”

In August, the U.S. Capitol Police stated that Byrd was cleared of any wrongdoings in the shooting after an internal investigation.

Multiple cellphone videos showed Babbitt with a Trump flag wrapped around her neck as she tried to crawl through the broken glass pane at Capitol. Byrd was standing to the side of the doors and fired one shot that sent Babbitt crashing backward onto the floor.

Babbitt was struck in the shoulder and died later. Her death was a turning point in the riot.

In April, the Justice Department determined that there wasn’t enough evidence to show Babbitt violated his civil rights and that it was reasonable to assume the officer was firing in self-defense or to defend lawmakers fleeing the House chamber.