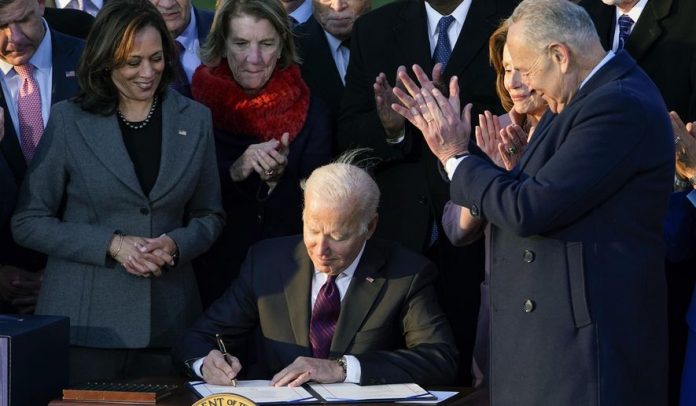 Although the White House claimed Monday that Vice President Kamala Harris was an important member of President Biden’s team, staffers bungled the introduction of the vice-president at a high-profile bill signing ceremony hours later.

Jen Psaki, White House Press Secretary, denied reports that Ms. Harris is unhappy with her position. She described the vice president as “a key partnership” for the president and a “bold leader.”

“I can tell you that there’s been a lot of [negative] reports out there and they don’t reflect his view or our experience with the vice president,” Ms. Psaki said.

As if to underscore Ms. Harris’ importance in the administration, the White House gave her a prominent role in a ceremony on the South Lawn of the White House as Mr. Biden signed into law a $1.2 trillion infrastructure bill. The two emerged from the White House together, smiling and giving thumbs-up signals to the audience as they strode across the lawn in bright sunshine to strains of “Hail to the Chief.”

In a slap on the face, Ms. Harris arrived at the podium to speak, the White House’s public-address announcer asked the crowd instead to “please welcome Heather Kurtenbach,” an Ironworkers organizer who was to introduce Mr. Biden. The vice president thus spoke without introduction.

“In a moment,” a smiling Ms. Harris said of the labor leader, who was standing beside her at the podium.

The president thanked Ms. Harris, but then digressed into an awkward joke about the vice president’s husband, second gentleman Doug Emhoff, spending too much time with first lady Jill Biden. He referred to Mr. Emhoff as Jill Biden’s “second husband.”

“No. I’m joking. These guys travel all over the country together. I’m getting worried, you know?” the president stated.

Ms. Harris said the infrastructure legislation “proves that in America, we have the courage to believe a better future is possible, and to build it together.”

But her political future remains open to question. CNN reported that Ms. Psaki defended the vice president after citing more than three dozen sources. They said that top presidential advisors had “largely thrown their hands at Vice President Kamala Harir and her personnel — deciding that there simply isn’t enough time to deal with them now, especially when President Joe Biden has rapidly increasing legislative and political concerns.”

“The exasperation runs both ways,” the report stated.  “Many in the vice president’s circle fume that she’s not being adequately prepared or positioned, and instead is being sidelined. The vice president herself has told several confidants she feels constrained in what she’s able to do politically.”

Democrats viewed Ms. Harris in this year’s election as the successor to Mr. Biden, whether it was in 2024 or 2028. Some Democrats have questioned this possibility after her first year in office was rocky. Others believe Ms. Harris is limiting her public appearances.

“Where has VP Harris been?” Jacquelyn Bettadapur, chair of the Cobb County, Georgia, Democrats, asked The Washington Times in an email. “Haven’t seen much of her as of late.  Of course, her presence on the national stage is subject to determination by the Biden administration, not her own personal volition.”

Ms. Psaki was asked by the president if he would give his “automatic endorsement” for her in 2024 or 2028. The president dodged the question.

“I don’t have any predictions of whether she will run when she will run,” she said. “I will leave that to her.”

Ms. Harris recently returned from a five-day trip to France. The trip was partially intended to increase her profile. Last week’s poll showed that she was 28% in her approval rating, which is a record low for a vice-president at this stage in her first year.

Pete Buttigieg (Transport Secretary), is being referred to as someone who could jump frog over Ms. Harris in the presidential race. He said Monday that criticisms of her are “totally wrong.”

“The vice president is coming off a very successful diplomatic mission overseas,” he said on Fox Business Network. “She has been one of the leading figures in making sure that this piece of infrastructure got passed. And I can tell you, in this administration, being given tough assignments is a sign of respect and confidence. I admire her. I’m proud to work with her.”