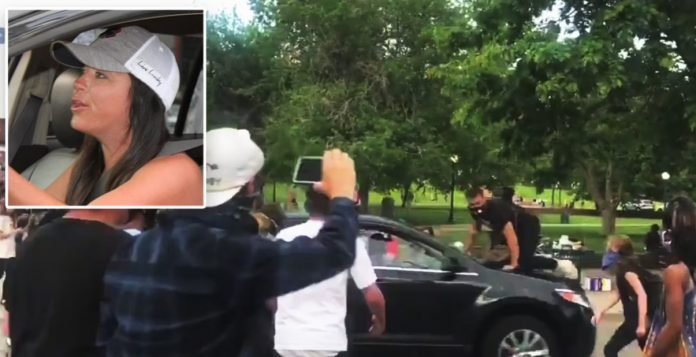 A Denver jury convicted a woman accused of hitting George Floyd protester with her SUV.

The woman was convicted of reckless driving, a misdemeanor. However, she was not found guilty of assault in the hit on the protester with her SUV charge.

According to Fox News, the defendant’s attorneys, Jennifer Watson, posted a statement on social networking stating that she shouldn’t have been charged.

“Ms. Watson should not have been charged. We appreciate the jury’s verdict of not guilty to the assault charge,” driver Jennifer Watson’s attorneys at Brackley Law Office PLLC said in a statement on Facebook after the verdict Friday.

Darn, she should have been arrested! These people were surrounding her car. You have every right to be afraid when someone runs in front of a car. If you are scared, what do you do? Stay there and you could have your car damaged or even taken out of the car. You can drive away to escape danger. Anybody with common sense would drive away to escape this situation as quickly as possible.

It is time to change the law and stop allowing protestors to block traffic and run through the streets. When they block traffic, no one is listening. People, get a job!

“On the evening of May 28, 2020, my client was just trying to get home, driving a route she took regularly, when she was diverted by protesters at the intersection of East Colfax and Broadway. She was alone in her car with her dog when she was surrounded by people who began kicking and hitting her car and taunting and yelling at her. While stopped, Mr. Max Bailey jumped up onto the hood of her car and her windshield was smashed in two places. She was terrified and fearful for her safety,” Watson’s lawyers said last year in a statement.

Here you go. She shouldn’t have been charged. Protesters are 100% responsible. It is outrageous that someone would jump on your car to smash your windshield. Wait, a Democrat would say “how dare you let only one person smash your windshield!” You dare not drive away from them and not let them wreck your whole car. You have the nerve!