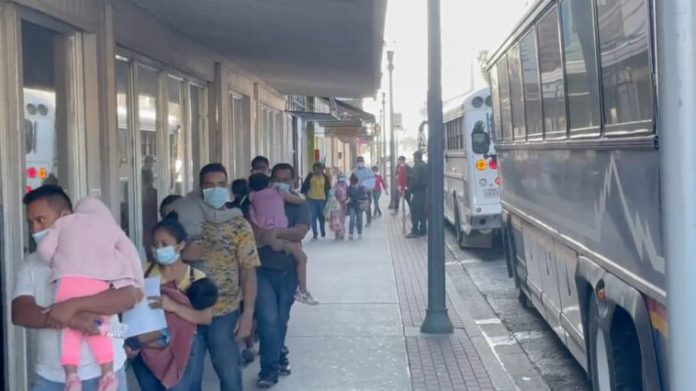 The presidential document was obtained by NBC News, which also states that 18 percent of migrant families are testing positive for the pandemic virus after they are released by Border Patrol officials into border communities.

“Migrants are not tested for Covid in Border Patrol custody unless they show symptoms, but all are tested when they leave Border Patrol custody, according to DHS officials,” NBC reported. “Immigrants who are allowed to stay in the U.S. to claim asylum are given tests when they are transferred to ICE, Health and Human Services or non-governmental organizations.”

“As of Wednesday, more than 15,000 migrants were in Border Patrol custody, according to Customs and Border Protection data obtained by NBC News,” the report added.

“In the last 2-3 weeks, the percent positivity rates among all demographics has increased,” the document says.

NEW: The city of McAllen, TX says the federal government has released over 7,000 COVID positive migrants into their city since February, including over 1,500 new infected migrants in just the *last week alone*. A local state of disaster in McAllen has been declared. @FoxNews

“NEW: The city of McAllen, TX says the federal government has released over 7,000 COVID positive migrants into their city since February, including over 1,500 new infected migrants in just the *last week alone*. A local state of disaster in McAllen has been declared,” Bill Melugin wrote.

Javier Villalobos, a Republican mayor from McAllen, Texas, is blaming the Biden administration for its handling of the U.S.-Mexico immigration crisis.

Villalobos spoke out about his plans to create an isolation camp in order to defend his city from the COVID-19 epidemic among illegal aliens during an interview with Fox News’ America’s Newsroom.

“We had to make an emergency decision to put up tents,” Villalobos said.

He said Catholic Charities, which have been housing illegal immigrants that Border Patrol has been busing into the city and releasing after they’ve been processed, “couldn’t handle it anymore.”

“We shouldn’t and we cannot let all the immigrants roam around our city, especially with the high COVID rate,” Villalobos said.

“Last week, we had to do a temporary facility right here in McAllen because the — it’s done a capacity of 1200 and that’s it. We have to take emergency action otherwise 200 plus possibly positive immigrants released into McAllen, we couldn’t do that,” he said.

“Yes, we did — we built a couple of tents the next day moved them to what you just saw in Mission, Texas. So we have an issue now, we have thousands of people in donna. You go to the west, and now we have mission and then you go to the south and we have this. And we do have a mess,” Villalobos continued.

“We need everything. That’s why we filed a disaster declaration because we cannot be doing a federal job. This is not our responsibility, we’re trying to keep our people safe. We filed a declaration, we need funds from the state or the federal government to do what they’re not doing, and that kind of anger us because it’s a callous disregard to have the border patrol just drop off the immigrants in downtown McAllen,” he said.