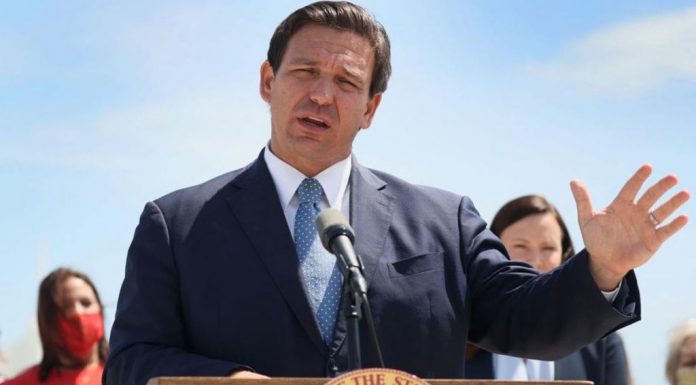 Florida Gov. Ron DeSantis reacted to recalcitrant schools boards who plan to ignore his executive order against mask mandates. He said they might not get paid.

“With respect to enforcing any financial consequences for noncompliance of state law regarding these rules and ultimately the rights of parents to make decisions about their children’s education and health care decisions, it would be the goal of the State Board of Education to narrowly tailor any financial consequences to the offense committed,” said a statement from the GOP governor’s office on Monday.

“For example, the State Board of Education could move to withhold the salary of the district superintendent or school board members, as a narrowly tailored means to address the decision-makers who led to the violation of law,” the statement continued.

The statement stated that education funding is meant to benefit students, not the systems.

It stated that “The Governor’s priorities include protecting parents’ rights, and ensuring that every student gets a high-quality education that suits their unique needs.”

This statement is the latest in a growing conflict between larger Democrat-run schools districts in the state, and DeSantis. DeSantis has repeatedly stated that he believes that forcing children to wear masks for longer than eight hours a day is harmful.

He also stated that, given the low susceptibility of children to COVID-19 or its Delta variant, parents should make the decision and not school districts.

Monday’s statement clarified that salaries for school board members and superintendents would be withheld and not teachers.

DeSantis’ statement was also made after parents in Florida asked for a judge’s block to DeSantis order prior to the official start of school.

DeSantis’s order is alleged to have violated a provision of the state constitution that requires school officials ensure safety for students.

“The Executive Order impairs the safe operation of schools,” said the parents in the lawsuit, which was filed in Leon County.

“Students will become sick and potentially die as a result of the failure to follow the mandatory masking requirements” that were established by the Centers for Disease Control and Prevention.

In fact, the CDC issued guidance, not requirements, and initially, the agency said that only unvaccinated children 12 and younger should wear masks.

“Other states, like California and Washington, have required them in public schools but with some flexibility for school districts,” the outlet continued.

DeSantis’ executive order of July 30 was a rebuke to the CDC’s guidance.

Sen. Bill Cassidy, R-La., a physician who practiced for 20 years, told CNN over the weekend he disagreed with DeSantis’ order.

“The local officials should have control here,” Cassidy said.

“When it comes to local conditions, if my hospital is full, and my vaccination rate is low, and infection rate is going crazy, we should allow local officials to make those decisions best for their community.”