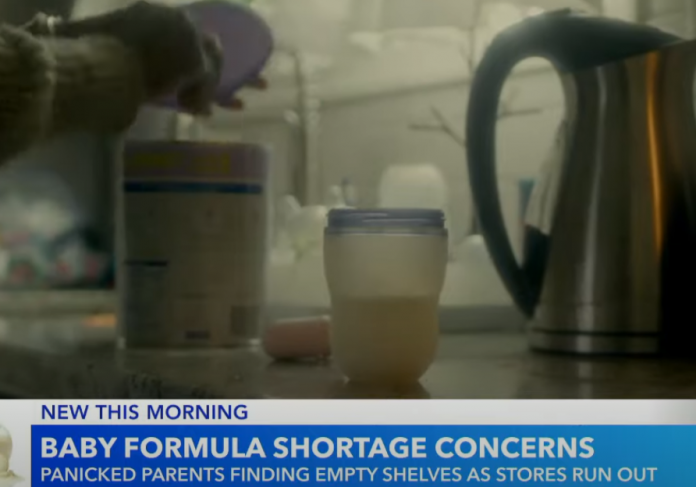 As the country’s baby formula scarcity worsens, parents of newborns throughout the country are going to social media to call for media attention and government action while uploading photographs of empty shop shelves.

Last week, one new mom tweeted, “If the mainstream media can talk about the toilet paper shortage ever hour, they should be talking about the baby formula shortage at least,” “We ended up finding the Amazon brand online but not everyone is so lucky to be able to feed that. Please share. This is every store!”

If the MSM can talk about the toilet paper shortage ever hour, they should be talking about the baby formula shortage at least… we ended finding the Amazon brand online but not everyone is so lucky to be able to feed that. Please share. This is every store! pic.twitter.com/jYBHSAlZiy

Finding specific formulae that individual newborns can tolerate has become a concern. Several parents reported difficulty getting formula at all, and delivery has become unreliable.

A mother of small children in Michigan claimed her latest Amazon purchase for formula was delayed and then canceled on Thursday, so she went out and was dismayed to find no formula in at least four big stores in her region.

The mother of a newborn in New York said her kid lost a lot of weight after birth and she and her husband had to supplement the baby’s food with formula because she couldn’t produce enough breast milk.

She said that they have tried Target to get some formula, unfortunately, the shelves are empty. Fortunately, their baby doesn’t require any special formula, and they were able to order it online.

“But not everyone has been so fortunate.  Our neighbor said her family member can’t find the sensitive type of formula for their newborn who has stomach issues anywhere. They’re in a panic daily not knowing if they’ll be able to feed their newborn tomorrow or the day after; my heart breaks for those parents,” she continued.

The baby formula shortage began with supply chain concerns, but it has worsened in recent weeks as a result of Abbott Laboratories’ recalls following the deaths of two newborns who apparently drank formula prepared at the company’s Sturgis, Michigan factory.

Due of the shortages, big shops such as Target, Walmart, Walgreens, and CVS have imposed limitations on how much customers may buy at once.