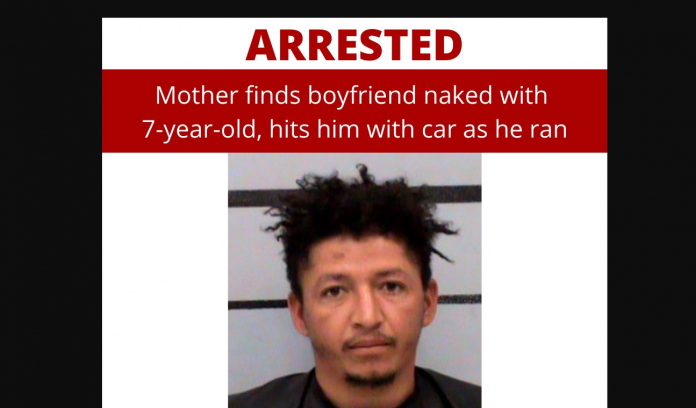 A mother contacted 911 to report that she saw her boyfriend naked in bed with her 7-year-old daughter, and that after he fled, she got in her car, tracked him down, and struck him.

The boyfriend was described in the police report as Delmer Orlando Ortiz Licona, 29, but his name is recorded at the jail as Orlando Delmer-Ortiz. The Lubbock man is charged with aggravated sexual abuse of a minor.

Around 1 a.m., a lady dialed 911, according to police. According to the station, she reported her boyfriend in bed with her 7-year-old daughter on Aug. 8.

“What are you doing to her?” yelled the woman during the 911 call, According to the station, a woman told the dispatcher she wanted an officer at her house and said, “I just found my man, huh, whoever lives with me, naked in the bed with my daughter” and “please hurry, he’s running away, please hurry.”

According to the station, the lady also told the dispatcher she was following the suspect, after which the dispatcher heard a loud sound as if something had been struck, followed by a young kid screaming and weeping.

In March, investigators were assigned to the case, and the mother consented to bring her kid in for a forensic interview, during which the youngster described the attack in detail.

According to the station, police sought to interrogate Licona about the sexual assault probe in April, but according to police reports, he frequently failed to show up for scheduled appointments with the investigator.

With that, the matter was turned over to the criminal district attorney’s office, an arrest warrant for Licona was obtained, and he was put into prison on Tuesday for an immigration enforcement detainer.