Biden at Capitol as Democrats Scale Back $3.5T Plan 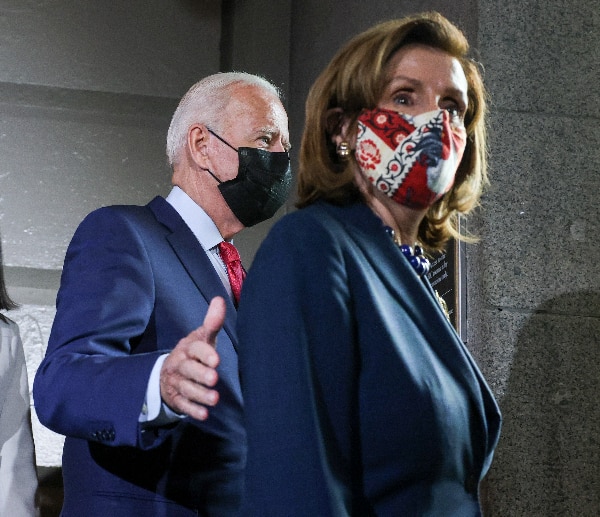 After days of intense negotiations, President Joe Biden arrived at Capitol Hill to meet with legislators. Democrats tried to save a reduced version of their $3.5 trillion government overhaul as well as a related public works bill.

“We’ve made some progress,” said press secretary Jen Psaki. “Compromise requires everybody giving a little. That’s the stage we’re in.”

Despite Speaker Nancy Pelosi’s assurances that Congress would vote on the $1 trillion infrastructure bill, which is popular but has been ensnared by the debate over Biden’s larger measure, Congress had stopped all action. As negotiations dragged on, voting on Friday seemed increasingly unlikely, putting at risk the president’s large domestic agenda.

West Virginia Democratic Senator Joe Manchin, who is holding out, had lost all hope of a quick compromise. He refused to compromise on his demand for a smaller overall package of around $1.5 trillion, despite hours spent on shuttle diplomacy with White House aides. This is too little for progressive lawmakers, who refuse to vote on the public work measure without Biden’s larger framework on the larger bill.

Talks raged about a compromise around the $2 trillion mark. A quick deal was becoming increasingly impossible for the moment, however, as Manchin stepped in. Democrats were pleased to welcome Biden’s visit, despite their complaints about not hearing enough about the president’s plans for the future.

“It’s his time to stand up,” said Rep. Dean Phillips of Minnesota.

Due to ongoing negotiations, Biden chose to stay in Washington on Friday rather than travel to Delaware as he does so often on weekends. According to a poll by The Associated Press-NORC Center, his public approval rating has fallen.

The president and his party are facing a potentially embarrassing setback — and perhaps a politically devastating collapse of the whole enterprise — if they cannot resolve the standoff.

Biden’s bigger proposal is a years-in-the-making collection of Democratic priorities, a sweeping rewrite of the nation’s tax and spending policies that would essentially raise taxes on corporations and the wealthy and plow that money back into government health care, education and other programs, touching the lives of countless Americans.

“We understand that we’re going to have to get everybody on board in order to be able to close this deal,” said Rep. Pramila Jayapal, D-Wash., the leader of the Congressional Progressive Caucus. “We’re waiting for that.”

Frustrated and with their trust frayed, centrist Democrats watched the promised vote slip on the first piece of Biden’s proposal, the slimmer $1 trillion public works bill, a roads-and-bridges package, as progressives flexed their leverage.

Pelosi asked members of the private caucus to stand for the infrastructure package during a meeting on Friday. Most did, according to the people in the room. Pelosi appears to be willing to take the risk of failure, even though she has few votes.

Instead, the House and Senate were poised to swiftly approve a 30-day extension of surface transportation programs that are expiring with the fiscal yearend, halting furloughing of more than 3,500 federal transportation workers. That also creates a new deadline to act on the stalled $1 trillion infrastructure bill.

The White House and Democratic leaders are intently focused on Manchin and to some extent Sen. Kyrsten Sinema of Arizona, two centrist Democrats who helped steer the public works bill to Senate passage but have concerns that Biden’s overall bill is too big. The two senators have infuriated colleagues with their close-to-the vest negotiations that could tank Biden’s effort — and their own campaign promises.

“I’m willing to sit down and work on the $1.5,” Manchin told reporters Thursday, as protesters seeking a bigger package and Biden’s priorities chanted behind him outside the Capitol.

After hours of negotiations that stretched near midnight Thursday, Manchin said he could not yet compromise. “I don’t see a deal tonight. I really don’t,” Manchin told reporters as he left.

The political stakes could hardly be higher. Biden and his party are reaching for a giant legislative accomplishment — promising to deliver vision, dental and hearing care for seniors, free kindergarten for youngsters, strategies to tackle climate change and more — with a slim majority in Congress.

Pushing for the package is testing Biden and Pelosi, as well as some leading figures of the Democratic Party. Their legacy will be determined by whether they succeed or not.

“We’ve been fighting for transformative legislation as all of you know; these discussions have gone on for month after month after month,” said Sen. Bernie Sanders, I-Vt., the chairman of the Budget Committee and a leading progressive lawmaker. “This is not a baseball game. This is the most significant piece of legislation in 70 years.”

Biden seeks to reach a deal with his party members to achieve a signature policy achievement, despite Republicans being hostile to the president’s big plan.

Manchin’s demands for a reduction in the overall size are not the only thing that is riling liberal colleagues. Manchin wants the aid to be restricted to those with lower incomes, and not to wider swathes of Americans. He’s also resisting some of his bolder attempts to combat climate change.

“Trying to kill your party’s agenda is insanity,” she said.