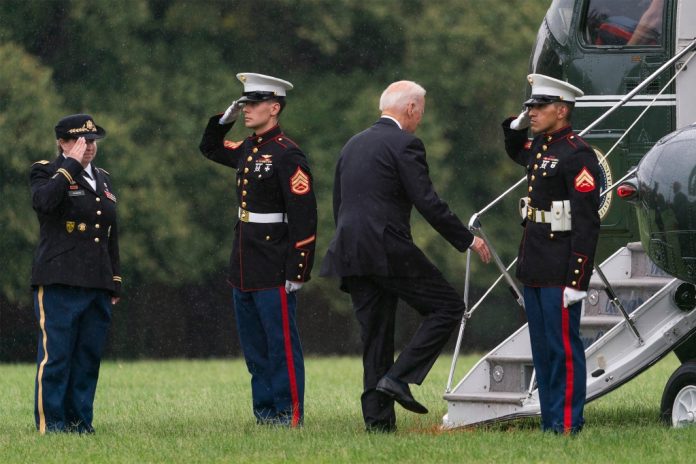 President Joe Biden’s two-pronged infrastructure and social spending agenda were defeated this week by Democratic infighting between moderates and progressives, which has left both bills in Congress stalled.

But, instead of staying in the White House to push for compromise and passage, Biden has returned to Delaware, Breitbart reported.

These two pieces of legislation include the $1.2 trillion bipartisan Infrastructure Framework (BIF) that was passed by the Senate months back and the $3.5 trillion “Build back Better” tax and spending bill, which includes funding for a variety of domestic and climate-related social programs.

Both bills are favored by moderates and the latter by progressives. House Speaker Nancy Pelosi (D-CA), linked them together to increase leverage and to compel members of both wings to support both bills simultaneously.

Pelosi’s clever plan went sour when moderate senators reacted. Joe Manchin (D.WV) and Kyrsten Silena (D.AZ) refused to support the $3.5 trillion bill. This prompted House progressives to increase their threats to spike bipartisan infrastructure package if it was brought to the House for a promised vote.

Both bills are now deadlocked, but negotiations for a compromise are still underway behind closed doors. It is not clear if Biden will engage in these negotiations while on vacation in Delaware this weekend.

Prior to leaving the White House Saturday morning, President Biden stopped to briefly speak with reporters and acknowledged that “Everybody is frustrated” — though he later claimed that he, personally, was not frustrated — and vowed to “work like hell to make sure we get both of these passed, and I think we will get them passed.”

While he took some shots at congressional Republicans, even though his Democrats are deliberately trying to pass the legislation alone, the president continued to promote the leftist highlights and bills. He reiterated his promise to “try and sell what I believe the people — American people” and to continue to push for the leftist aspects of the bills. And I am convinced.

Concerning the difficulty of getting moderates/progressives on the same page in relation to the bills, Biden also called attention to Sinema and Manchin, although he did not mention their names. He said that “We can bring together the moderates/progressives very easily if we had two additional votes.” Two. Two people.”

Speaker Pelosi was a major contributor to the impasse by linking the two bills together. She then tried briefly to dissociate them for the infrastructure vote, which was twice scheduled, twice canceled, and then she relinked the bills together again.

Nevertheless, She lied with a press release Friday about Biden’s brief visit with congressional Democrats — she claimed he “received a hero’s welcome!” — and stated, “While great progress has been made in the negotiations to develop a House, Senate and White House agreement on the Build Back Better Act, more time is needed to complete the task,” adding, “the Bipartisan Infrastructure bill will pass once we have agreement on the reconciliation bill.”

However, a more frenetic-sounding statement was released Saturday. It stressed the need for “more time” to reach agreements that would lead to both spending bills being approved. This is time that Biden will likely spend at his Delaware home.