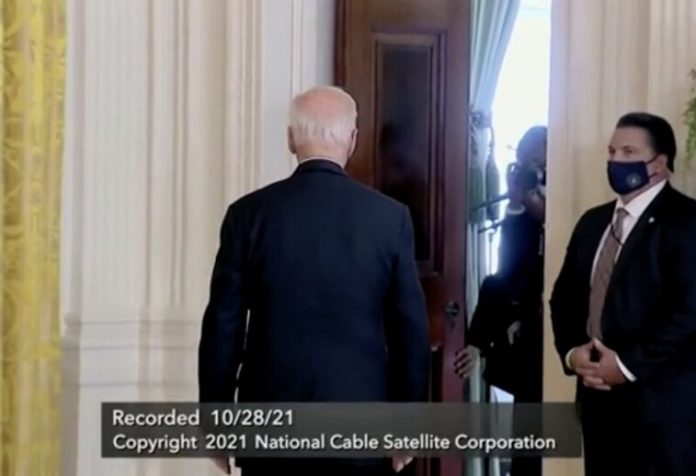 Joe Biden, cowardly running for his life after he gave a speech on Thursday, refused to answer questions from the media.

It should not be surprising. Because he knows it is possible to get away with it, Biden has made the decision to abandon the media.

They let Biden slide because 98% of the reporters in the room were Democrats.

“This is about believing in America, about believing in the capacity of the American people,” said Biden towards the end of his speech. “If you look at the history of the journey of this nation, what becomes crystal clear is this, I’ll say it again, given half a chance, the American people have never, ever, ever, ever let the country down. So let’s get this done. God bless you all, and may God protect our troops and I’ll see you in Italy and in Scotland. Thank you,” he concluded. He thanked everyone for their support and then he dismissed all questions from the media.

He refused to answer questions and made a run for it.

When President Trump was in office, He answered all questions, no matter how hateful the media made of him. They were unfair. Yes. They were malicious. Yes. Trump didn’t let that stop him. No.

Biden is one of the least transparent “Presidents” in history, and it’s only getting worse.