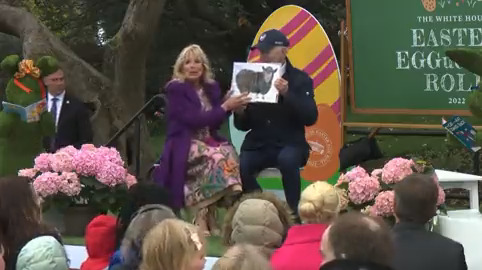 Joe Biden had a difficult day at the Easter Egg Roll on Monday.

As we witnessed, he was being bossed around by both the Easter Bunny, who turned out to be Meghan Hays from the Comms department, and his own wife, Jill, who told him to stay after they finished reading and wave from the balcony with the two Easter Bunnies. While they strive to keep him from making any more gaffes, the effort to control him makes him look even worse, and the treatment is then reported instead.

“They’re not going to let me read at all,” Biden complains.

However, during the event’s reading to the young children, Joe Biden had another uncomfortable incident. The plan appeared to be that Jill Biden would read the story to the children, but he would just sit there. But then Joe grumbled about the powers that be not allowing him to read. “They’re not going to let me read,” he whined, sounding like a five-year-old who didn’t receive the toy he wanted at the store. Jill finally gave up and let him read the first page, handing him the book and telling him to “read it backward.” After reading the first page, he handed it back to her.

When they don’t want him to read a kid’s book for a few minutes, he’s kept on a short leash.

The Bidens missed one page, the one that dealt with the term “red bird.”

But they didn’t notice the “black sheep,” which Jill interprets as “black sheep black sheep.” Joe then said, “I saw Jill looking at me.”

Joe Biden: "I see Jill looking at me." pic.twitter.com/OwxACGNnGq

Then came Jimmy Fallon, who joined them. He read from “Nana,” a children’s book he wrote, and he didn’t waste any time doing it. As a result, they only read for around seven minutes as a group. Joe, on the other hand, did not quickly follow Fallon and Jill Biden out of the stage. Instead, he proceeded to talk incoherently.

Meghan Hays, who has taken a lot of the heat from reporters for the White House’s poor press access, appears to be the Easter Bunny who restricted Biden’s effort to answer a reporter’s question today.

The Easter Bunny who censored Biden's attempt to answer a reporter's question today seems to be Meghan Hays, who has gotten much of the blame from reporters for poor WH press access https://t.co/jf0V3TTJGd