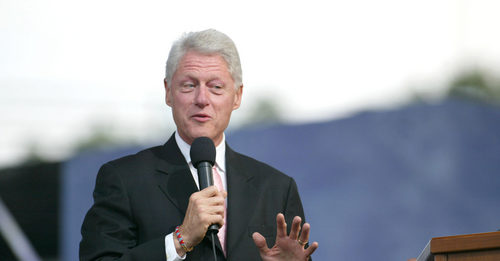 Many Americans are tired of the Clinton family. The Clintons have been known for decades to be corrupt and yet they manage to emerge relatively unscathed.

People who have dirt on the Clintons may sometimes meet an untimely and suspicious end. This is sometimes referred to online under the “Clinton Body count”.

The Clintons are back in the limelight, speaking out on various issues in today’s politics.

An interview with Bill Clinton, former President, was given to CNN recently, where he slammed what he believes to be various tactics from the GOP, per Breitbart News.

The Latest From Clinton on Republicans

During Clinton’s interview with CNN, he said that the Republican Party uses scare tactics to its advantage. Former president Clinton declared that the GOP is based on scaring swing voters into supporting them over Democrats.

Clinton stated that Democrats could retain the Senate and House of Representatives in November provided they communicate the “right things” to the voters.

There’s no denying the former president’s statements are what Democrats want to believe. However, Clinton’s narrative just doesn’t work for some very clear reasons.

The Problem With Clinton’s Narrative

Clinton’s claim that Republicans are scaremongering voters into backing them is disproven by Democrats themselves.

After all, leftists are the ones accusing Trump supporters of being enemies of democracy, amid saying the nation will fall to fascism if Republican get back in power.

It is Democrats, not Republicans, who are doing their best to frighten Americans into voting for them. Meanwhile, Democrats will not get honest with the country about issues facing the economy, problems with illegal immigration, the rise in crime, and more.

“The annual inflation rate came in at 8.3 percent…What can you do better and faster to [combat inflation]?”

BIDEN: “First of all, let’s put this in perspective” pic.twitter.com/WIrYG3pUUu

Even with so many issues facing the United States today, Democrats are campaigning on keeping the status quo and saying voting for them is the only safe path forward.

Bill Clinton’s claim that Dems can keep the Senate and the House of Representatives if they just say the right things to voters is obscene.

Voters got a firsthand view of the destruction that can be caused by Democrats controlling Congress and the White House. In November, Americans will have the final say on what the power balance in Congress looks like for the next two years.

What are your thoughts on the latest allegations that Bill Clinton made against Republicans? We’d love to hear from you.