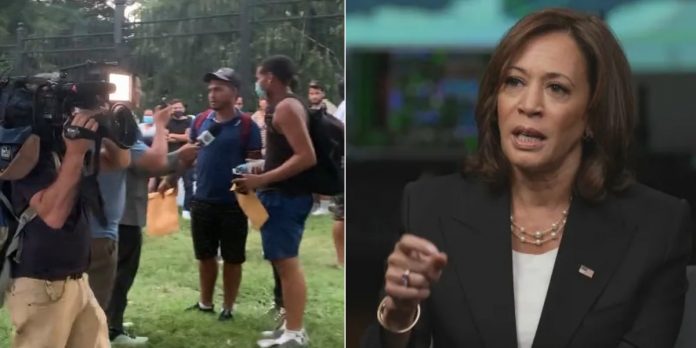 Busloads of undocumented immigrants came outside Kamala Harris’ home on Thursday morning. Harris is the vice president and border czar who has overseen the greatest border crisis in American history.

The migrants were delivered by bus to Harris’ home in Washington, D.C., which is close to the Naval Observatory. Fox News’ Griff Jenkins reported live from Texas.

Greg Abbott, the governor of Texas, sent between 75 and 100 people who were taken up at Eagle Pass, Texas. The group comprises immigrants from Mexico, Uruguay, Uruguay, Venezuela, and Colombia. Contrary to what Harris claimed in an interview on Sunday, a number of migrants said they believe the border is open.

Images of the undocumented immigrants arriving in Martha’s Vineyard were provided by Rob Wray of 7 News. It doesn’t seem to be comparable to the Holocaust in any way.

Under President Joe Biden, there were 900,000 “gotaways” who managed to enter the country and 4.9 million unlawful migrant crossings at the southern border, according to FAIR estimates. The annual cost of the increased illegal immigration to the nation is projected to be $20 billion.

In addition to the planes Gov. DeSantis sent on Wednesday, his administration confirmed that busloads of illegal immigrants also arrived at Kamala Harris’s mansion in Washington, D.C. on Thursday.