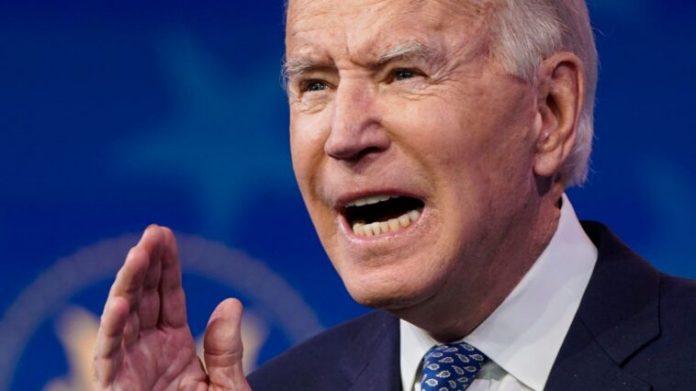 On the state of the border, President Biden said during his State of the Union address, saying we need to secure our border and overhaul the immigration system if we want to achieve liberty and justice.

Joe proceeded, unfazed by their remarks about the actual state of the nation, his two brain cells entirely concentrated on reciting the lines on the teleprompter and returning to his basement, saying:

“And as you might guess, I think we can do both. At our border, we’ve installed new technology, like cutting-edge scanners, to better detect drug smuggling. We’ve set up joint patrols with Mexico and Guatemala to catch more human traffickers.

We’re putting in place dedicated immigration judges in significant larger number so families fleeing persecution and violence can have their cases…cases heard faster…(applause)…and those who don’t legitimately here can be sent back.

We’re screening — we’re securing commitments and supporting partners in South and Central America to host more refugees and secure their own borders.

Provide a pathway to citizenship for Dreamers — (applause) — those with temporary status, farmworkers, essential workers. To revise our laws so businesses have workers they need and families don’t wait decades to reunite.“

He then went on, mumbling something about how the Chamber of Commerce agreed with him on that.

The Border Patrol agents who have to deal with Trump’s border foolishness aren’t pleased with his remarks. After that, they went off on him, saying they had no faith in him and that his rambling speech about the border was nothing more than a joke.

“Very few people within CBP believe this administration will actually secure the border, they just do not believe in it. All of their actions, comments and practices are solely about pushing in as many illegal aliens as possible, not just those from the Americas but from around the world,” one agent stated.

One agent also slammed Biden’s remark about cutting-edge scanners, claiming that technology wouldn’t help if the Border Patrol couldn’t cope with the illegals.