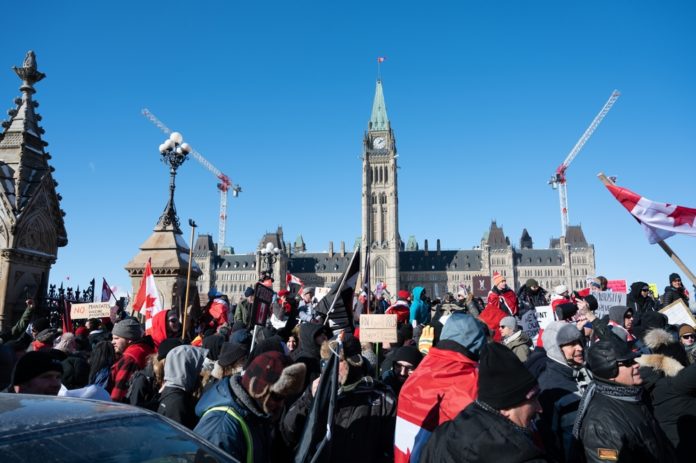 Authorities in Ottawa strengthened their presence in the nation’s capital on Thursday as they prepare to evict the Freedom Convoy activists who have been sitting in peaceful protests for nearly three weeks.

Law enforcement issued written warnings to protestors for the second day in a row, encouraging them to leave the area immediately and threatening arrest on a charge of misconduct.

This is absolutely epic.. the tow truck drivers have arrived in Ottawa.. and they *joined* the “FREEDOM TRUCKERS”

Police also set up a security perimeter around Parliament Hill, with checkpoints set up to prevent anyone without a good purpose from entering the demonstration area. The police also installed a new security fence surrounding Parliament.

Police generally disregarded activists camped overnight within the secured area. However, police swooped in on Thursday and made a slew of arrests.

During one of the raids, Chris Barber, one of the protest’s organizers, was handcuffed. Two further arrests were made by people who did not appear to be affiliated to the protest’s core team of organizers and trucking businesses, according to David Paisley, who supervises supplies and operations for the drivers.

For the first time since it was created in 1988, Justin Trudeau used the Emergency Act on Monday, proclaiming it a final resort to deal with the Freedom Convoy activists’ illegal barricades.

Trudeau took to the House of Commons on Thursday to defend himself against his critics and clarify his use of the act.

Opposition MPs in Parliament, as well as governors of several provinces, have slammed Trudeau for resorting to the act, which opponents think was unnecessary, especially given the Trudeau government’s inability to engage in dialogue with protest leaders.

Trudeau, on the other hand, has condemned the protesters, accusing them of extremism and white supremacy.

Despite Trudeau’s and the police’s warnings, a tiny group of dozens of activists has kept their position. For the sake of their cause, many of them are willing to be arrested.