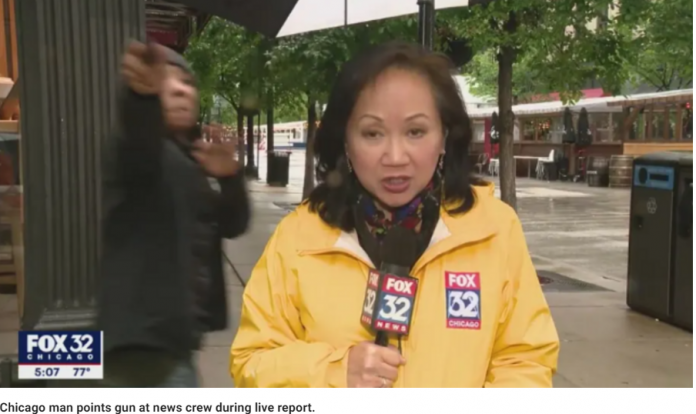 Police in Chicago are seeking the public’s assistance in locating a guy who is suspected of pointing a pistol at a FOX 32 news team during a live program in the city’s River North area.

A guy stepped behind reporter Joanie Lum and pointed what seemed to be a weapon at the camera as he passed by as the Fox 32 team was shooting a live program on gun violence on Wednesday. As he went down the street, he remained visible to the camera and seemed to be clutching the pistol.

The individual has been identified as a person of interest in the incident, and police have sought the public for assistance in determining who he is and where he is. Anyone with information should contact the Chicago Police Department at 312-744-8261.

In recent weeks, Chicago has seen a surge in gun violence, including the fatal shooting of a teenager in the city’s iconic Millennium Park earlier this month. In the incident that culminated in the death of 16-year-old Seandell Holliday, a 17-year-old juvenile was arrested and charged with second-degree murder.

That incident was one of several that occurred around the same time, with the city documenting a 12-hour period in which three teenagers were shot, one fatally.

Murders were down 6% and gunshot incidents were down 13% over the previous year, according to Chicago police, although such occurrences are still occurring at a greater rate than they were from 2018 to 2020.

Mayor Lori Lightfoot has taken steps to address the problem, establishing limitations on kids’ travel within the city and a citywide 10 p.m. curfew. Curfews on weekends and at 6 p.m. Minors who are not accompanied by an adult are subject to a park curfew.