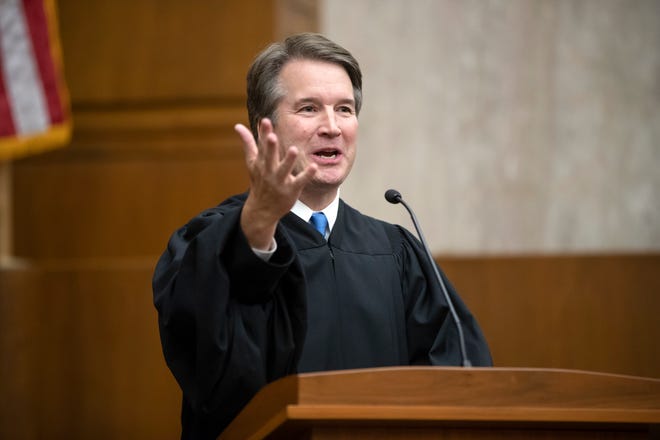 Some Democrats want to get another crack at Supreme Court Justice Brett Kavanaugh, They are not content with launching endless investigations into ex-President Donald J. Trump.

Despite the dishonest and disgraceful tactics used by the party in 2018, Kavanaugh was able to secure the support of Susan Collins of Maine, and he took his seat at the highest court of the nation despite fierce resistance.

Democrats refused to accept their loss, with some members of Congress suggesting that he might be impeached. Meanwhile, others have quietly plotted to find a way to remove Kavanaugh. They have now seized on a new detail about the FBI’s investigation into the sitting justice.

In a June letter sent to Democrat senators, Sheldon Whitehouse of Rhode Island and Chris Coons of Delaware, FBI assistant director Jill Tyson divulged that a tip-line that the bureau set up resulted in over 4,500 tips, the most “relevant” of which were referred to the Office Of White House Counsel.

The news resulted in another letter by Senate Democrats led by Whitehouse sent to FBI Director Christopher Wray demanding additional details that could provide fodder for a probe into the Trump White House.

This long-delayed answer confirms how badly we were spun by Director Wray and the FBI in the Kavanaugh background investigation and hearing.https://t.co/x24NcE3KtC

Never before has such a travesty over a SCOTUS nominee taken place. The hearings were a sick circus that brought shame upon the Senate for the reliance on sketchy alleged “victims” of the young Kavanaugh along with their unprovable decades-old allegations. Although there were mobs of activists sent to D.C. to intimidate Kavanaugh, it was not enough to stop his confirmation.

No one should be happy that Justice Kavanaugh has a lifetime appointment to the US Supreme Court and that 4,500 tips that may have had a significant bearing on his fitness, including whether he committed perjury before the Senate Judiciary Committee, were not investigated. https://t.co/AYC8wGnh95

The sheer viciousness that is being directed at Kavanaugh and not Amy Coney Barrett who replaced liberal icon, Ruth Bader Ginsburg on the bench can largely be attributed to his role on the team of Independent Counsel Kenneth Starr who investigated Bill Clinton, This humiliation was never forgiven by Democrats.