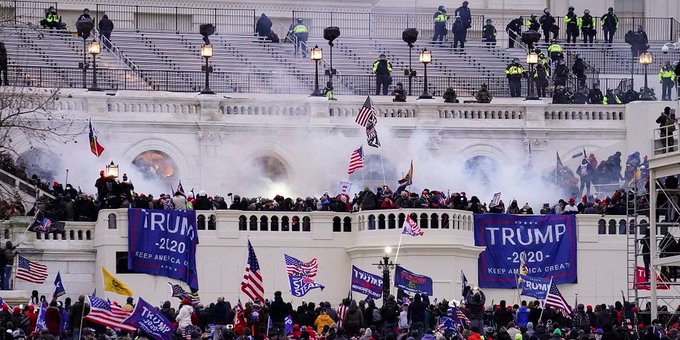 If a court follows the advice of federal prosecutors, a former Virginia police sergeant who stormed the Capitol on January 6, 2021 with Donald Trump’s followers might receive a sentence of up to eight years in prison on Thursday.

Thomas Robertson, a former police sergeant for the Virginia municipality of Rocky Mount, was found guilty by a jury in April of six felony offenses, including hindering an official investigation and obstructing justice.

If US District Judge Christopher Cooper concurs with the prosecution’s assertion that Robertson misused his position of trust as a law enforcement officer, eight years would be the heaviest term imposed thus far in a Capitol riot case.

Guy Reffitt, a member of the extreme right Three Percenters militia, was given a seven years and three months in jail sentence by a federal judge earlier this month.

On January 6, thousands of Trump backers descended into the Capitol in an effort to reverse his election loss, which Trump erroneously says was the product of fraud.

The defense lawyer for Robertson is requesting a maximum sentence of 15 months.

Since last year, when the judge determined that he had disobeyed court orders and continued to buy what the prosecution characterized as an armory of weaponry online, he has been detained. During a search of his residence, FBI officers also discovered a loaded M4 rifle and a pipe bomb that had not yet been fully built.

Jacob Fracker, who Robertson had reported to on the police force, testified during Robertson’s trial. On January 6, 2021, Robertson and Jacob Fracker entered the Capitol together and snapped a picture.

The mobile phones they were using that day, according to the prosecution, were destroyed by Robertson afterwards.

Fracker, who worked with the Justice Department, entered a plea of guilty to a conspiracy charge in March and will be sentenced on August 16. Prosecutors are requesting that the judge sentence him to six months of probation with a requirement of community imprisonment or home detention in exchange for his cooperation.