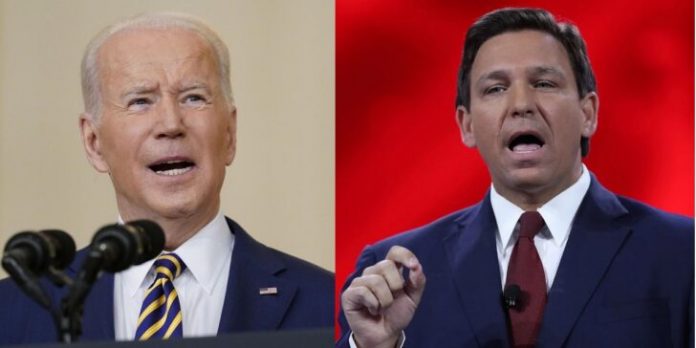 Recently, Florida Governor Ron DeSantis transported a small number of illegal Venezuelan immigrants to Martha’s Vineyard, and as was to be expected, many on the left went ballistic. A Texas sheriff declared that he was looking into the criminality of DeSantis’ action. Biden snapped and criticized DeSantis’ action. The 50 illegals were deported to a military installation in less than 48 hours, despite the liberal elites on Martha’s Vineyard’s claims that they had been “enriched” by them.

Rep. Hakeen Jeffries, one of the senior Democrats, charged DeSantis with acting like a human trafficker during a press conference.

“The behavior of individuals like Ron DeSantis and Greg Abbott is radical, reckless, regressive and reprehensible. They should start behaving like governors and stop behaving like human traffickers. They are putting politics over people in the most egregious way possible.”

With that, De Santis retaliated with, “I didn’t hear a peep. I haven’t heard a peep about all the people that have been told by Biden you can just come in, and they’re going, they’re being abused by the cartels, they’re drowning in the Rio Grande. You had 50 that died in some shed in Texas. I heard no outrage about any of that. I haven’t heard outrage about all the fentanyl that’s come across the border that’s killing Americans in record numbers.

“I don’t hear outrage about the criminal aliens that have gotten through and have then victimized people — not only in Florida, but all throughout the country. I didn’t hear any outrage about that. The only thing I hear them getting upset about is you have 50 that end up in Martha’s Vineyard, then they get really upset.”

“And I’m sorry, those migrants were being treated horribly by Biden. They were hungry, homeless, they had no opportunity at all. The State of Florida, it was volunteer, offered transport to sanctuary jurisdictions, because it’s our view that one, the border should be secured. And we want to have Biden reinstitute policies like Remain in Mexico and making sure that people aren’t overwhelmed.