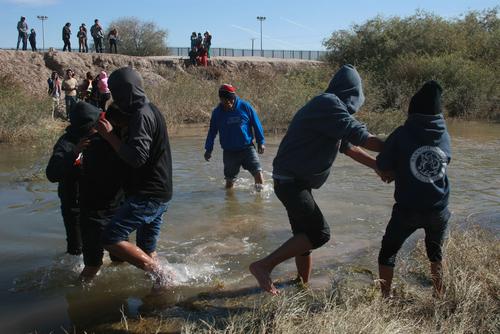 To address the growing issues brought on by the Biden border crisis, Florida Governor Ron DeSantis made extraordinary efforts.

His most recent actions will drastically limit the amount of human trafficking entering the United States through the southern border.

DeSantis highlighted that the current administration’s careless practices have made human trafficking viable in America when discussing the border changes.

DeSantis established a strike squad to combat human trafficking and smuggling, and it will also keep an eye on any illicit firearms entering Florida across the southern border.

This strike team will be created in cooperation with municipal and state law enforcement organizations, according to a press statement.

According to the statement, the task force was formed as a result of the arrests of five illegal aliens in Honduras and two from El Salvador during the course of the previous three days by various law enforcement authorities.

.@GovRonDeSantis: "I don't think there's been very many government failures quite as big as the failure of the border […] All those communities now, traditionally been blue areas, they're all going to go very dark red in the election because of the border." pic.twitter.com/arALenFMZw

In addition, four grams of fentanyl, which has the potential to kill up to 2,000 Floridians, was also seized.

According to the press release, this strategy will bring peace to Florida and demolish well-known worldwide people smuggling networks.

The governor enacted broad laws to that end, prohibiting any government agency from entering into any agreement with a transportation company to carry people into the country illegally.

The news statement stated that the businesses might still enter into agreements to have these individuals removed from Florida.