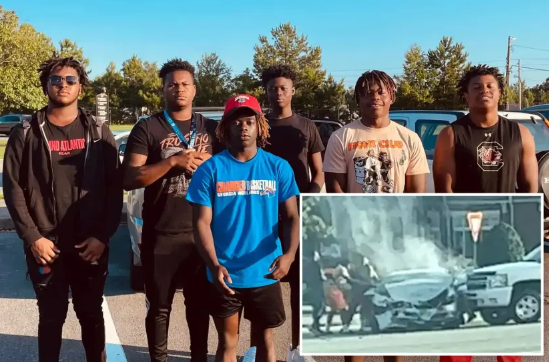 After saving the life of a woman injured in a vehicle incident, a group of high school football players from Georgia are being recognized for their fast thinking and bravery.

Cesar Parker, Treyvon Adams, Antwiion Carey, Messiah Daniels, Tyson Brown, and Alto Moore from the Rome High School football team were on their way to class last Friday when they saw a terrible incident between two automobiles in which a 50-year-old woman was trapped.

Luis Goya, a math teacher, claimed that even though the car’s doors were stuck and it was spewing smoke and liquid all over the place, the courageous sportsmen stepped in to save the woman.

“She was shaking and still in panic, but our RHS boys gave her comfort and were able to help her,” the teacher said. “The Rome High School football players really showed up today. They went above and beyond to help this lady without hesitation.”

Following the collision and amazing rescue, the children sprung into action, which was captured on the school’s security cameras.

Coach John Reid remarked, “When I saw the video I was like, oh my gosh, these kids really did run right into danger and have a sensational event where they helped a lady out of a car that could have caught fire.”

A little silver automobile involved in the collision was struck when another vehicle reportedly drove out in front of it. The woman was taken to a nearby hospital with wounds and bruises but is expected to recover without any problems.

Numerous members of the neighborhood thanked and praised the youngsters on social media for their fast thinking.