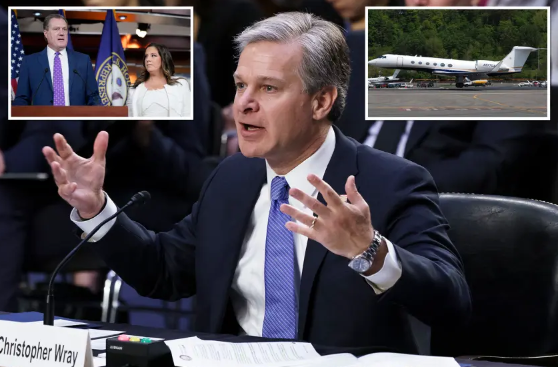 House Republicans demanded Monday that FBI Director Christopher Wray come clean about his personal travel on an official FBI jet, citing The Post’s reporting that Wray cut short a Senate hearing earlier this month so he could head to the Adirondacks for some R&R.

No. 3 House Republican Elise Stefanik (R-NY), joined by the top Republicans on the House oversight and intelligence committees, asked Wray to hand over records about his personal use of the jet and reimburse taxpayers for any non-official travel.

In order to avoid questions about whistleblower claims that the FBI protected first son Hunter Biden from investigations into his international business dealings, Wray claimed he had to leave a Senate Judiciary Committee hearing early in order to catch a flight on August 4. Wray then flew to Saranac Lake.

At the hearing, Iowa’s Chuck Grassley, the chair of the Senate panel, ripped at Wray, saying that if he was using a government plane, he could delay its departure.

Republicans will be able to order Wray to turn over papers if they win back control of Congress in the midterm elections in November, something they are now unable to do.

Republican wrath over the FBI raid on former President Donald Trump’s Palm Beach, Florida, home last week has prompted scrutiny of Wray. According to court documents that were revealed on Friday, the unusual raid on an ex-president was connected to his alleged improper handling of secret materials.

Wray attracted attention when he left the committee meeting on August 4 early.

Wray seemed to make the claim that he was going for official business after the session was over, despite Grassley’s fruitless attempts to persuade him to stay for further questioning. Since he was a youngster, Wray, 55, has made the Adirondacks one of his favorite summertime vacation spots. For 14 years, Cecil, his father, served as commissioner of the Adirondack Park Agency.