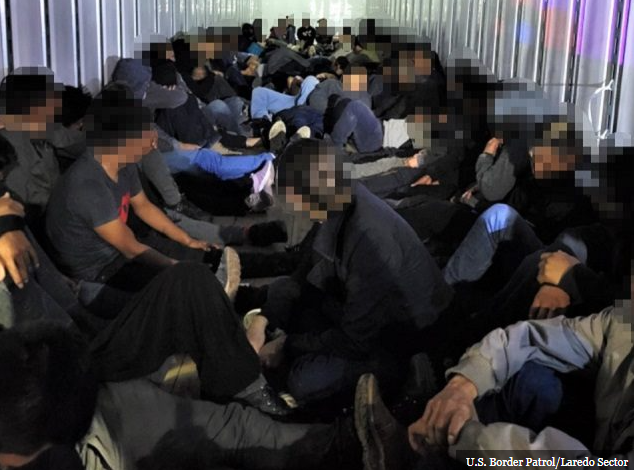 A Mexican illegal immigrant who attempted to pass through a Texas Border Patrol checkpoint in a tractor-trailer hauling 85 migrants entered a guilty plea. The people there endured suffocatingly hot temperatures. A few weeks after the attempted smuggling, 53 migrants perished in another trailer.

Jose Luis Vega Arzate, 31, recently appeared before the U.S. When charged with one count of conspiring to smuggle illegal aliens, he pled guilty before Magistrate Judge Marina Garcia Marmolejo in Laredo. Mexican native Vega Arzate, who was detained while unlawfully present, hails from Nuevo Laredo. The individual claimed to the police that he was using his driving income to cover his personal smuggling expenses.

According to court filings, the case started on May 10 when Vega Arzate drove a tractor-trailer with 85 migrants concealed inside to a Border Patrol checkpoint north of Laredo.

Agents noted that Vega Arzate spoke in stuttering English, was perspiring, and seemed anxious during their initial inspection. Vega Arzate struggled to adjust the truck’s gears in order to comply when the agents instructed him to proceed to a separate area so they could scan the vehicle with an X-ray machine.

A police dog that indicated to the trailer was employed by the authorities. 85 migrants were detained by agents, who also gave first assistance.

Vega Arzate admitted to investigators that he was in the country illegally and that he did not possess a commercial driver’s license during questioning. He stated that he had been transported to a human stash house after being smuggled into Laredo two days earlier. His smuggling payments were reduced from $8,000 to $2,500 in return for agreeing to operate the tractor-trailer there.

Weeks before the attempted smuggling in May, 53 migrants perished in another sweltering trailer traveling from Laredo to San Antonio.