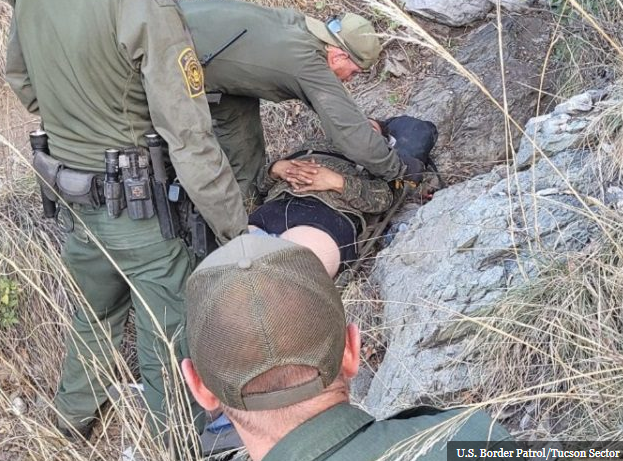 Border Patrol agents from the Tucson Sector rescued a wounded migrant lady who had been abandoned in the harsh Arizona highlands near the Mexican border.

Chief Patrol Agent John R. Modlin of the Tucson Sector posted photographs of a wounded migrant who had contacted 911 for help.

Several Brian A. Terry Station agents responded to a 911 call in the rugged Huachuca Mts. After locating the injured female Mexican citizen, agents teamed together and carried her to an awaiting ambulance. A heroic team effort. #HonorFirst pic.twitter.com/dmdX3X6w59

According to Chief Modlin, agents from the Brian A. Terry Border Patrol Station responded to the 911 call and found the injured lady in the rocky Huachuca Mountains.

Because of the terrain, the agents had to carry the woman out of the mountains by hand to an ambulance. The woman was recognized as a Mexican national who was unlawfully present in the United States by the authorities.

An air asset responded to a group of suspected migrants Tucson Sector BORSTAR agents observed north of SR-86 near Three Points, AZ. They spotted the group and directed agents to the area. A total of 14 migrants were apprehended. Good work. pic.twitter.com/CF35x2tjko

The same day, BORSTAR agents from Three Points Station noticed a group of migrants north of SR-86. Chief Modlin stated that the agent requested a helicopter aircrew to locate the migrants and direct ground-based agents to the area.

The crew of the plane observed the gathering of 14 migrants and sent agents to the location. The agents apprehended the 14 migrants and arranged for their transfer to a processing site.