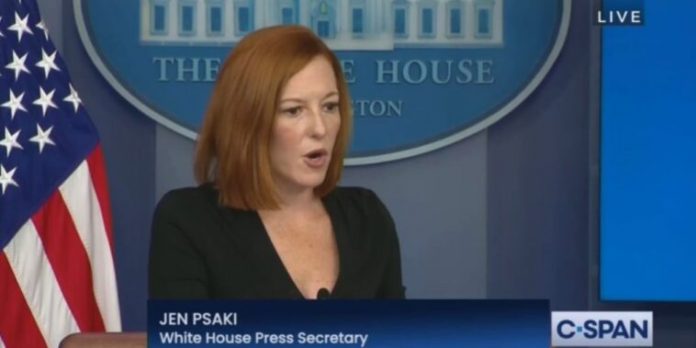 Jen Psaki, White House Press Secretary, has given disturbing details about the U.S. military’s coordination with the Taliban in relation to Americans’ security in Afghanistan.

She made clear at a press conference that the United States views the security situation as requiring coordination with the terrorist group. After President Biden’s sudden withdrawal of military troops before the evacuation of civilians, the Taliban took control of the war-torn country in August.

She was nonchalant when she was asked about the U.S. evacuation effort.

“A part of that would certainly be having a coordinated approach and engagement with the Taliban because in order to continue to evacuate any American citizen who was not yet prepared to leave, who wants to leave, third-country nationals and Afghans with visas, we will need to coordinate with the Taliban.”

It is shocking to see how rapidly the United States has fallen. Psaki’s admission of U.S. troops need to coordinate with the terrorist regime comes after an alarming and potentially treasonous report by the Biden administration that it had turned over “lists” of Americans and Afghan allies (as well as any other terrorist group that is working with the Islamist opposition government to the United States).

“U.S. officials in Kabul gave the Taliban a list of names of American citizens, green card holders and Afghan allies to grant entry into the militant-controlled outer perimeter of the city’s airport, a choice that’s prompted outrage behind the scenes from lawmakers and military officials,” Politico has reported.

“The move, detailed to POLITICO by three U.S. and congressional officials, was designed to expedite the evacuation of tens of thousands of people from Afghanistan as chaos erupted in Afghanistan’s capital city last week after the Taliban seized control of the country,” the report continued. “It also came as the Biden administration has been relying on the Taliban for security outside the airport.”

Multiple explosions at Kabul’s airport resulted in the deaths of 12 U.S. military personnel, 11 Marines, and one Navy medic. It was the first day of U.S. military casualties in Afghanistan since February 2020 and the worst day for American troop death since 2011.