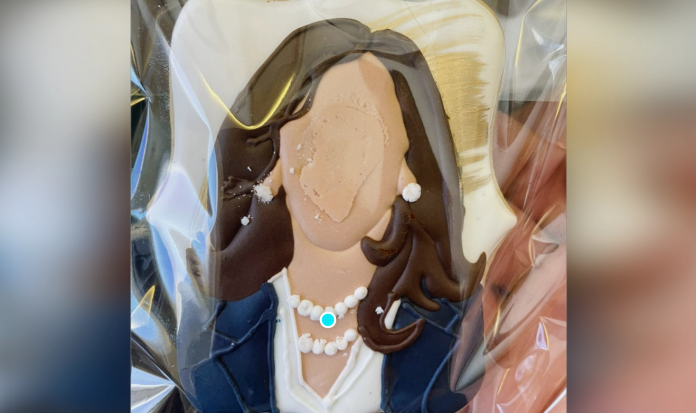 Kamala Harris handed out a cookie which looked like her face to journalists on a plane, and folks on the right are freaking out on Twitter.

In a tweet published Sunday night, White House reporter Courtney Subramanain shared the picture of the Kamala cookie, that includes the VP’s own hair and type of her face, although that part in Subramanain’s cookie seemed to be smushed.

@vp made an OTR visit to the back of the plane and delivered cookies decorated with the shape of her likeness as well as AF2. pic.twitter.com/TQrUR47Vgc

“@vp made an OTR visit to the back of the plane and delivered cookies decorated with the shape of her likeness as well as AF2,” she wrote.

“Handing out cookies with her face on them as the border crisis rages,” composed GOP Chairwoman Ronna McDaniel at a tweet quoting the picture of the cookie. “The modern-day equivalent of ‘let them eat cake. ”’

The Marie Antoinette comparisons were popular, however, the scandal still feels fairly contrived, as Republicans were happy to host Donald Trump’s ego for four decades.

An unverified accounts on Twitter also claimed that the biscuits were a present to Harris from a”Black-owned bakery,” not made by her. But Subramanian nor the Harris team confirmed this, and it is totally unclear why this arbitrary account would understand that.

Still, fans of Harris are calling it a repurposed baked present, not a handmade face cookie cutter.

The tweet comes only a week after Republicans were shocked and outraged by Harris speaking into Memorial Day as”the long weekend,” which they said failed to honor the troops being memorialized.

The cookie and Harris were flying to Guatemala, where she gave a speech on Monday urging people leaving Central America to stay out of America.

“Do not come. Do not come. The United States will continue to enforce our laws and secure our border,” Harris said. “If you come to our border, you will be turned back.”

Perhaps that will be enough for Republicans to forgive her for the biscuits.