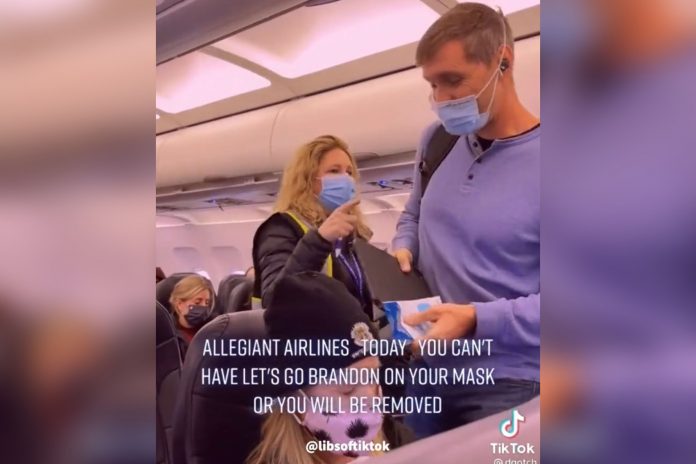 A guy was kicked off an Allegiant Airlines flight after refusing to take off his mask, which included the anti-President Joe Biden slogan “Let’s Go, Brandon.”

A passenger in an airline seat begins a fight with a flight attendant in a popular video shared to Twitter by the TikTok account Libs of TikTok.

This guy was reportedly kicked off a flight because he had “let’s go Brandon” written on his mask and refused to change masks. @Allegiant employee claims it’s an “FAA regulation” pic.twitter.com/4ipRbqggEB

After a series of squabbles, the woman told the man that he couldn’t record her and requested him to gather his belongings and go.

The customer was removed from the airplane due to his disobedience of the flight attendant, according to Allegiant.

Due to the wording, Allegiant would not say whether or not the traveler had broken the policy.

According to Allegiant, the passenger was removed from the flight and given a refund for his ticket. Federal regulations make it illegal to ignore flight crew instructions, and such behavior is grounds for removal from a flight if it creates an unsafe atmosphere.

The FAA announced in April that it would have zero tolerance for rowdy passenger behavior, including failure to follow crew members’ orders.

Allegiant also stated that it does not routinely remove passengers from flights and will not do so for minor reasons.

This isn’t the first time a passenger has been ejected from an Allegiant flight.

Katrina Alspaugh, a Las Vegas woman, screamed profanities, was thrown off a flight for not wearing a mask, and yelled the anti-Biden chant while she was being arrested in November.