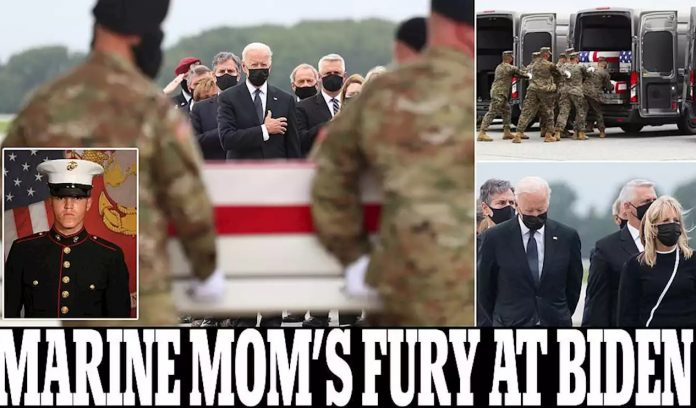 The mother of a Marine who was killed in a terror attack at Kabul’s airport, killing 13 U.S. soldiers, is blaming President Joe Biden as well as those who voted him for “just killing my son.”

The emotional exchange was tweeted by the host, Andrew Wilkow.

“My son was one of the marines that died,” she told Wilkow on Saturday. “Twenty years and 6-months-old, getting ready to go home from freaking Jordan to be home with his wife to watch the birth of his son, and that feckless, dementia-ridden piece of c**p just sent my son to die.”

“I woke up at 4 o’clock this morning. Two marines at my door telling me that my son was dead,” she sobbed.

“I just want all you Democrats who cheated in the election, or who voted for him legitimately, you just killed my son,” she said. “With a dementia-ridden piece of c**p who doesn’t even know he’s in the White House who still thinks he’s a senator. So, I’m gonna try to calm down, sorry.”

Kathy McCollum revealed to the radio host that her son was married on February 14th and that she and her husband were expecting a child on Sept 26th. She stated that she will hold back tears of sadness and “process her pain through anger.”

“This was an unnecessary debacle that could have been handled properly. They had months and months to remove everyone from Afghanistan and they chose not to,” she said. “And so they sent in what, 6,000 troops? And through the law of statistics, my son was one of the ones who just got blown up in a terrorist bomb yesterday.”

“So, instead of grieving and crying, I’m just getting mad,” she said.

The radio host asked her if there’s any organization in which they could connect her, or any information, they would recommend many family support groups they work with.

“I can’t imagine what you’re going through right now,” Wilkow told her. “Everything you’re feeling now is justified. I don’t think you have to apologize. You have every right to feel how you feel and speak your mind.”

The mother also said her boyfriend is an Army veteran who served in 801st, which is a combat support hospital, and that he was part of the first group of soldiers in Iraq in 2003. She believes his presence in the war on terror is what helped her son make his decision to join the USMC.

My son was a genius child. She said that he could have done any job in the military but chose to become a marine sniper.

“Instead of just being fast-tracked, he chose this course, but I never thought in a million years he would die for nothing,” she added.

She stated that he would not have died if Trump was still the commander-in-chief.

“[Biden] needs to be removed from office. It never would have happened under Trump,” Kathy McCollum said.