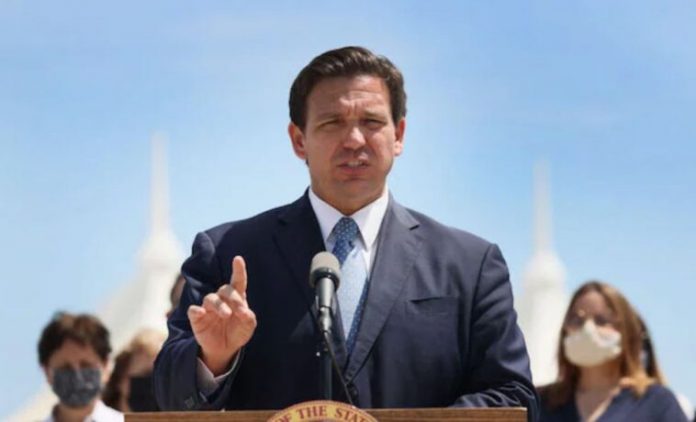 Florida Gov. Ron DeSantis attacked the Biden administration for its illegal migration of migrants without informing state officials and not asking permission.

In his letter to Homeland Security Secretary Alejandro Mayorkas, DeSantis, a Republican seen as a leading GOP presidential contender in 2024 if former President Donald Trump doesn’t run, said putting illegal migrants in Florida undermines the state’s effort to ensure that “criminal aliens are not released back into our communities.”

DeSantis reminded Mayorkas that he had written to DHS chief April asking that Immigration and Customs Enforcement agents be sent to him to take illegal alien felons in custody who were serving their sentences in Florida. He also noted that he had asked ICE to notify Florida’s law enforcement officers when the agency released criminal aliens.

He wrote, DHS “appears to be hard at work resettling ever-larger numbers of illegal aliens who have no lawful status under federal immigration law from the southwest border to Florida,” adding that the Biden administration does not appear interested at all in enforcing immigration laws in general.

“I ask that DHS immediately cease any further resettlement of illegal aliens in Florida and that the aliens instead be removed from the United States or resettled in states that support the administration’s continued flouting of our immigration laws,” DeSantis stated.

“Floridians welcome responsible immigration that serves the interests of Florida and the American people, but we cannot abide the lawlessness that your department is aiding and abetting on the southwest border,” he added.

DeSantis has been at odds with Biden’s administration for eight months. He also stated that 6,254 unaccompanied minors had been released into his state.

Sunshine State Governor also lashed out at President Joe Biden’s refusal to enforce all immigration laws duly passed by Congress as per his constitutional duty.

“It is beyond reasonable dispute that this administration’s lawless policies are incentivizing mass illegal immigration to our country,” he wrote.

“The states, not the federal government, bear the brunt of this administration’s lawless immigration policies. The states hold the police powers in our system of government and are responsible for the health, safety, and welfare of our people, he continued.

“By releasing illegal aliens, including unaccompanied minors, into the United States on such a massive scale, the federal government is saddling states and local governments with the resulting health, financial, economic, and public safety costs.”

DeSantis took aim at Trump in a tweet last Wednesday, claiming that he tried to reverse his “Remain In Mexico” immigration policy. This was after the U.S. Supreme Court ruled that Trump’s executive order was an unconstitutional violation under the Administrative Procedures Act.

“SCOTUS handed down yet another blow to the Biden Administration’s reckless border policies,” DeSantis tweeted.

“Reinstating the Remain in Mexico policy that Biden unlawfully rescinded will protect our communities and slow the influx of illegal aliens and illicit drugs at the southern border,” he stated.

Texas Governor. Greg Abbott, a Republican, has been at odds with the administration about its immigration policies since his state was flooded by hundreds of thousands of illegal immigrants from Mexico.

Abbott has increased the number of state law enforcement officers, and given his National Guard the authority to arrest illegal crossers.