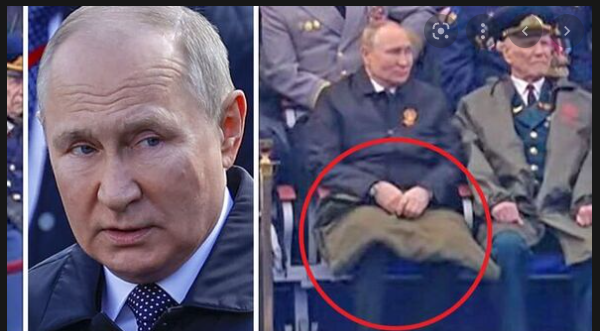 During a big Victory Parade on Monday, Russian President Vladimir Putin sat with a large blanket around his legs and seemed to be limping, reigniting suspicions about the strongman’s health.

Putin, 69, looked to be the only one wearing a blanket over his knees while surrounded by much older World War II veterans, according to the Mirror.

One Twitter user said, “President Vladimir Putin throws aside his Russian Wool blanket to stride manfully into the unknown.”

Putin, according to one joke, took a veteran’s blanket.

“The heavy blanket is an interesting detail,” observed former British ambassador Sir Tony Brenton. The Sun said that “there have been regular rumors of Putin’s ill health, which the Kremlin, of course, has not acknowledged.”

“However, he has been locked up for the last two years as a result of COVID and is only now being forced to re-engage,” he stated.

“Those who have spoken to him, such as French President Emmanuel Macron and Americans, have reported less coherence from him than they are used to,” Brenton added.

“There are legitimate reasons to be concerned about him.” “However, we must be cautious about what we wish for,” he continued.

Meanwhile, in Moscow, the temperature was a chilly 48 degrees Fahrenheit.

Putin afterwards walked with a noticeable stride on his approach to the Tomb of the Unknown Soldier to place a wreath, according to the Daily Mail, possibly to mask a limp.

Questions about Putin’s health have been raised when a video published by the Kremlin showed him looking bloated and uncomfortably holding a table for support during a meeting with Defense Minister Sergei Shoigu.

He also seemed wobbly at an Orthodox Easter service in Moscow, however other accounts claim he wasn’t even present and that the Kremlin doctored the film.