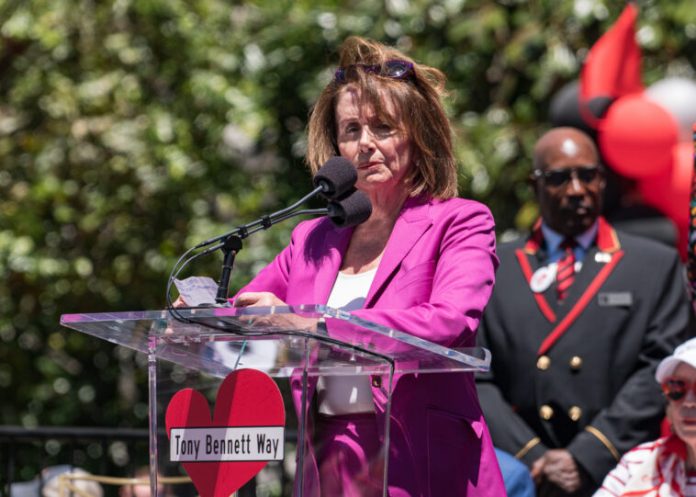 According to Kyle Becker , Nancy Pelosi was not in a good mood following the defeat of Terry McAuliffe by Glenn Youngkin in Virginia’s governor’s race.

Nancy Pelosi, Speaker of the House, isn’t taking Election Night 2021 very well. She was a bit snippy when she was asked about the results of last night on Capitol Hill.

A reporter asked “Does that change the agenda for this House?”

She said “No” and then she walked off.

Benny succinctly stated it on Twitter: “She was pissed.”

And it wasn’t just McAuliffe’s crushing defeat that had Pelosi upset. A Trump-backed candidate won the Ohio special election, where Republican Mike Carey has won the special election for the House seat in Ohio’s 15th Congressional District.

But, those victories and Pelosi’s furor aren’t all Jack Posobiec Senior Editor at Human Events says that Nancy Pelosi may not run again due to the Red Wave that crashed into the Old Dominion. He tweeted that he was hearing Pelosi tell people that she will not be running tonight. She doesn’t want to be tied down to 2022.”

Hearing Pelosi is telling people she is not running for re-election tonight. Doesn't want to be tied to 2022.

Posobiec may not be able to provide any sources, but he is often correct about what’s happening. Talk of Pelosi running is not a sudden occurrence. According to Conservative Brief, rumors of Pelosi leaving office have circulated for some time now.

Last month, a report from The Atlantic declared that Democrats may already have her replacement if they keep the House majority next year.

“Democratic members of Congress won’t talk about any of this publicly, as if Pelosi might suddenly appear and pull their hearts from their chests,” it said. “Pretty much every Democrat in Congress and beyond is confident that Representative Hakeem Jeffries of New York will be the next speaker of the House if Democrats manage to hold on to their majority next year.”

Pelosi has not been a candidate again and told CNN’s Jake Tapper she is open to discussing her decision with her family.

Democratic House Nancy Pelosi won't say whether or not she plans to run for Speaker again if Democrats keep the House, telling @jaketapper she will that conversation with her family first. pic.twitter.com/BrvnGmcMsr

She says she must talk to her family about it, but it’s possible that she is afraid of another election in a time where both her poll numbers as well as those of Democrats overall are falling.

SF Gate reported that Pelosi was even less popular than other controversial figures in August.

A poll by NBC News revealed that House Speaker Nancy Pelosi was one of the most disliked high-profile politicians in America, with lower unfavorable ratings then former President Donald Trump or House Minority Leader Kevin McCarthy.

Breitbart News reports that she has done worse in polling than ever before:

The leader of congressional Democrats has dropped double digits in approval rating since February per the latest National Republican Congressional Committee (NRCC) battleground survey results, a whole new low for Pelosi that further complicates Democrats’ efforts to pass President Joe Biden’s agenda and save their majorities in the U.S. House and Senate next year.

The results, obtained by Breitbart News, show that Pelosi has fallen to just a 36 percent approval rating across congressional battleground districts—with a solid majority of 57 percent of Americans disapproving of her performance. This October battleground poll, therefore, means she is 21 points underwater—a full 10 percent worse than she was in the NRCC’s February survey, when Pelosi was just 11 percent underwater.

And that article was written before the big GOP wins in Ohio and Virginia. These facts make it more likely that Nancy Pelosi won’t run for re-election in 2022. Conservative Brief describes that unpopular Nancy Pelosi could be too much for Democrats running in 2022.

With a razor-thin majority in the House, Pelosi’s unpopularity could be an anchor around the Democrat Party in the 2022 midterm elections and further shrink their presence in the House of Representatives enough to give Republicans the majority.

Pelosi has yet to comment on the rumors and announce her plans for 2022.