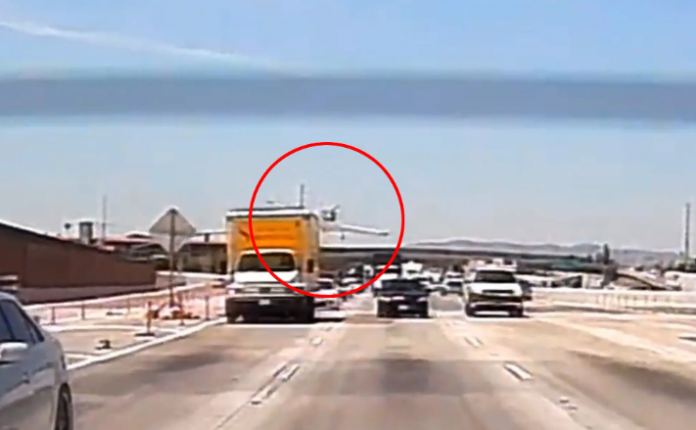 On Tuesday, a tiny plane made a stunning crash landing on a highway in California, striking a truck carrying passengers before catching fire.

Just after 12:30 p.m., an aircraft crashed into the eastbound lanes of the 91 Freeway in Riverside County near Lincoln Avenue, according to the California Highway Patrol.

The plane drops from the sky, touches down in the center of traffic, and then skids off toward the shoulder, leaving a trail of burning jet fuel in its wake, as seen in the outlet’s heart-stopping video.

Both the pilot and a passenger were able to safely exit the aircraft, according to CHP. A pickup with three persons inside was also struck by the plane, thankfully no one was hurt.

According to CHP, the pilot claimed to have made an emergency landing on the road after an engine failure occurred as the aircraft was on its route to Corona Municipal Airport.

Before a firefighter uses water to put out the flames, the plane is seen on video from the Corona Fire Department spewing large plumes of smoke. The burned-out wreckage of the aircraft is seen on the roadway in another departmental photo.

Major traffic delays resulted from the closure of the highway’s eastbound lane as police investigated the collision and cleared the scene of debris.

CHP Capt Levi Miller said in an interview, “We’re very fortunate today that the traffic was light, and the pilot appears to have made some good landing navigation that avoided what could have been a very bad tragedy.”