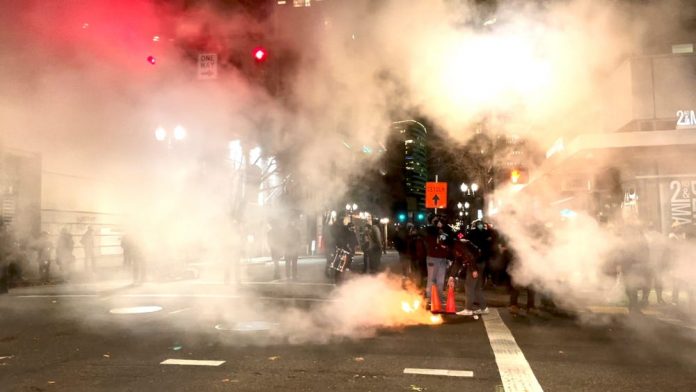 After windows were broken and officers were pelted by objects, a protest against Kyle Rittenhouse’s acquittal in Portland, Oregon was declared a riot.

The Multnomah County Sheriff’s Office declared the protest of 200 people to have been a riot at 9 pm due to “violent, destructive behavior by a substantial portion of the crowd.”

Officials stated that protesters had broken into the city’s Justice Center gate, which houses a precinct as well as a detention center. Social media videos show protestors chanting anti-police slogans, and “Kyle IS a terrorist.”

CLARIFICATION- @MultCoSO declared the riot downtown when the gate to the detention center was being damaged. @PortlandPolice sound truck was used to broadcast that information on behalf of our partners. PPB did not declare a riot.

KOIN TV reported that trash and debris were set ablaze in the streets and that some protestors also considered burning down the Justice Center. The police used loudspeakers and other means to order the crowd to disperse, or risk being arrested or subject to force including pepper spray or impact weapons.

KOIN TV stated that the majority of the crowd had dispersed by 11 p.m.

Portland police said on Twitter that at least one person was arrested.

After Rittenhouse (18) was cleared of all charges in relation to the fatal shootings of two men in anti-racism demonstrations in Kenosha (Wisconsin), last year, a crowd rallied in Portland.

The verdict has provoked strong political reactions. Many right-wing politicians have praised the teen shooter while others argue that the acquittal could encourage vigilante violent behavior.

In a statement, President Joe Biden called for calm while acknowledging that many Americans are “angry.”

“While the verdict in Kenosha will leave many Americans feeling angry and concerned, myself included, we must acknowledge that the jury has spoken,” he said.

“I urge everyone to express their views peacefully, consistent with the rule of law. Violence and destruction of property have no place in our democracy.”

As a response to the verdict, peaceful demonstrations were also held in many cities including Chicago, New York and Oakland.