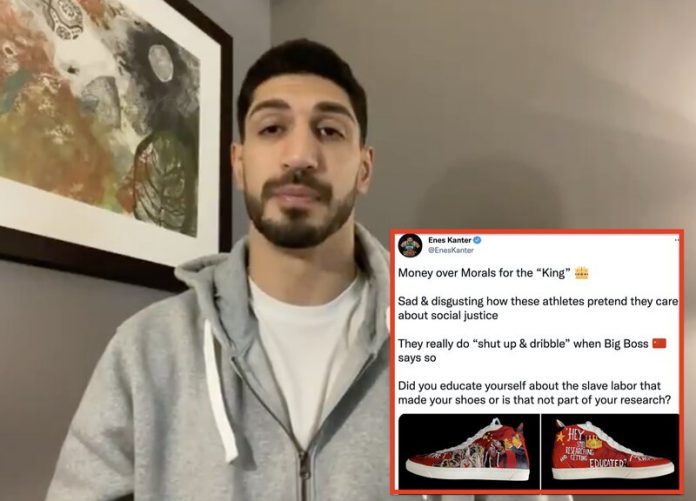 Since he joined the NBA, LeBron James was treated with child gloves. Before he did anything in the league, the media kneeled at him and called him “The King”.

James became more radical leftist over the years, and the media began to obsess about him. Nobody has ever had the nerve to expose James’ massive hypocrisy since then.

Kanter called James out earlier this week for his close relationship with Nike, China.

“Money over Morals for the “King”,” Kanter tweeted. Sad & disgusting how these athletes pretend they care about social justice. They really do “shut up & dribble” when Big Boss says so. Did you educate yourself about the slave labor that made your shoes or is that not part of your research?” he concluded.

Kanter is not the only one to speak out about communists in China.

Kanter posted photos of bloody shoes in late October and called out Nike for using slave labor to create their shoes. The shoes were labeled “Hypocrite Nik”, “Made With Slave Labor” or “Modern Day Slavery”.

“To the owner of Nike, Phil Knight,” tweeted Kanter.

“How about I book plane tickets for us and let’s fly to China together. We can try to visit these SLAVE labor camps and you can see it with your own eyes,” he added before calling out the cowardly LeBron James.

“LeBron James and Michael Jordan, you are welcome to come too,” Kanter concluded in his tweet.