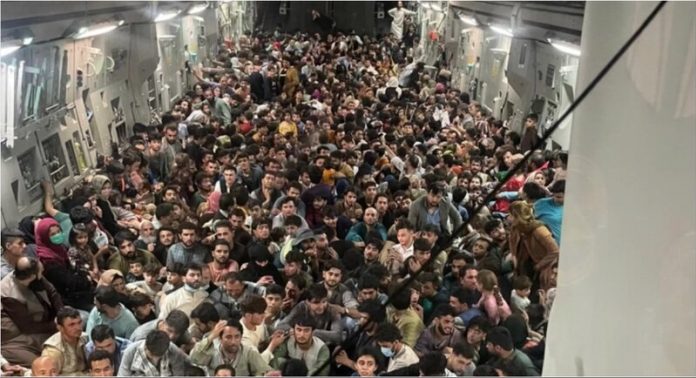 The Biden Administration has made another major mistake in its chaotic withdrawal of American troops from Afghanistan. The terrorist group Daesh (ISIS-K) may have easily gotten into the evacuation plane currently heading to the American homeland.

News reports claim that refugees arriving in the United States have not been vetted despite assurances by Biden’s State Department that all Afghans arriving at American borders have.

Many Afghans arriving at Dulles International Airport in Virginia, according to CNN have “no documents whatsoever” after having been screened and approved by President Joe Biden’s federal agencies.

Sources familiar with Biden’s huge refugee resettlement operation fear that ISIS terrorists might have slipped into the hasty withdrawal.

The Defense Department has already flagged almost 100 Afghans, out of the 7,000 who were evacuated recently, as having possible links to terrorist organizations. These individuals were listed on U.S. Intelligence Watch Lists, and are currently being rescreened.

CNN reports that despite the Biden Administration’s assurances that Afghans would be thoroughly vetted before they leave war-torn Afghanistan, the president’s approach is to “As many people as possible onboard the plane.We’ll take care of the (immigration visas) later“

“Some people have landed with no documents whatsoever, creating a very challenging work environment for the officers,” a DHS official confided.

CNN was also told by the same DHS official that they can identify Afghans without a person providing documents. However, is a math game due to the many thousands (and possibly hundreds of thousands) of people the Biden administration wants to resettle in America.

The large-scale resettlement, the DHS source told CNN, makes the likelihood of Afghans with ties to Islamist terrorism “higher and higher.”

The same DHS official also warned that the Biden administration does not know if a foreign national will become a terrorist once they settle in America.

U.S. intelligence and law enforcement officials fear that terrorists could have already slipped through due to the chaos and mayhem associated with the evacuation program.

“The challenging aspect is you can’t predict the future. You can’t tell when someone can go bad,” a former intelligence official stated.

Although resettled refugees are unlikely to have any ties with terrorist groups,it does happen. Afghanistan is a mosaic of tribal intermarriage, where different tribes of ruling families use marriage as political leverage.

John Kirby, a Pentagon spokesperson, stated last week that he didn’t know how many Afghans have applied for resettlement in America. Several were found to have been on terrorist watch lists.

Also according to NBC News, in at least 5 separate instances Afghan refugees at the Hamid Karzai International Airport in Kabul attempted to board U.S. bound flights using phony American passports.

“The U.S. mission team reported at least five cases of Afghans who presented U.S. passports that didn’t belong to them … highlighting fraud concerns and complicating the process of screening people to enter the airport,” the NBC News report stated.

The United States is not the only country that might be helping terrorists. According to Sky News an individual evacuated from Afghanistan was detained at Qatar’s Al Udeid Air Base due to possible links to the Islamic State of Iraq and Syria (ISIS).

After landing in Birmingham, the individual was placed on the United Kingdom’s No Fly List.

Sky News reported that several others were also on the U.K.’s no-flylist, trying to leave Afghanistan with Britain’s help.

A U.K. government spokesperson told the news outlet. “There are people in Afghanistan who represent a serious threat to national security and public safety.”

Adding, “That is why thorough checks are taking place by government, our world-class intelligence agencies and others. If someone is assessed as presenting as a risk to our country, we will take action.”

It remains to be seen what actions will be done for hundreds of thousands of refugees who still have to be vetted and be resettled across the Western world.