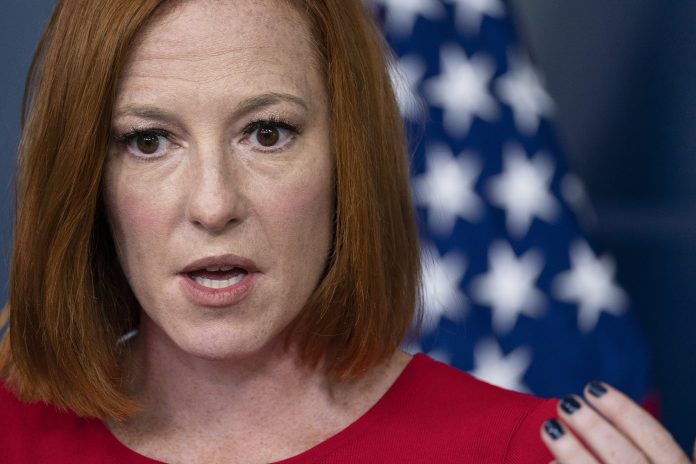 Jen Psaki, White House Press Secretary, said Thursday that the COVID-19 pandemic was “a root cause of recent organized looting incidents throughout the country.”

Psaki made the unexpected comment when she was asked about large groups of people that have been visiting San Francisco, Los Angeles, and Chicago-area shops for several weeks.

“Big cities are dealing with smash-and-grab robberies, a record number of police officers have been shot and killed this year. What is President Biden going to do about all this lawlessness?” asked Fox News reporter Peter Doocy.

Psaki initially blamed former President Donald Trump’s inability to provide more funding for local police, but then he turned the blame towards the pandemic.

“Well, Peter, I would say that when the president proposed additional funding in his budget over the funding that had been proposed by the prior president to increase in support local police departments, make sure we keep cops on the beat,” she said.

“Does the president still think that crime is up because of the pandemic?” Doocy further asked.

“I think many people have conveyed that and also one of the … root causes of crime in communities is guns and gun violence. And we’ve seen that statistically around the country,” Psaki answered.

“So when a huge group of criminals organizes themselves and they want to go loot a store — a CVS, a Nordstrom, a Home Depot until the shelves are clean — do you think that’s because of the pandemic?” Doocy pressed.

Psaki stated that a pandemic is a root cause of many communities.

Recent incidents saw groups of people converging on shops, making off like bandits. This recalls looting that occurred in May and June 2020 amid nationwide protests following the murder of George Floyd.

The latest incidents are not linked to civil unrest like last year and seem to be organized theft operations.

A raid on a Nordstrom department store in San Francisco, California was nearly two weeks ago. The thieves drove off with two dozen cars and up to $200,000 worth of goods, police stated.

This amazing incident was replicated in other cities.

A group of four also stole $20,000 worth of electronics from an Apple store in Santa Rosa (north of San Francisco) on Nov. 24. A Black Friday gang of around 10 people raided the Los Angeles Home Depot, taking hammers, sledgehammers, and crowbars.

On Nov. 17, 14 suspects broke into a Louis Vuitton luxury store in Chicago and stole $120,000 of merchandise. A group of two to three cars stormed a Neiman Marcus in Chicago on Nov. 19.

Some Democratic politicians blamed COVID-19-related financial woes on past looting. Rep. Alexandria Ocasio-Cortez, D-Bronx and Queens famously stated in July 2020 a crime wave was caused by people who “need their child to eat and they don’t have enough money.”

Psaki did not elaborate on her reasons for the recent looting raids. However, lower-income people were disproportionately affected by the highest level of inflation in 31 years which has increased food and transport costs. While Democrats say that inflation is the result of a pandemic, President Biden’s critics point fingers at his policies.

Conservative politicians blame the rise in property and violent crime on permissive policies which allow for light punishments for such crimes.