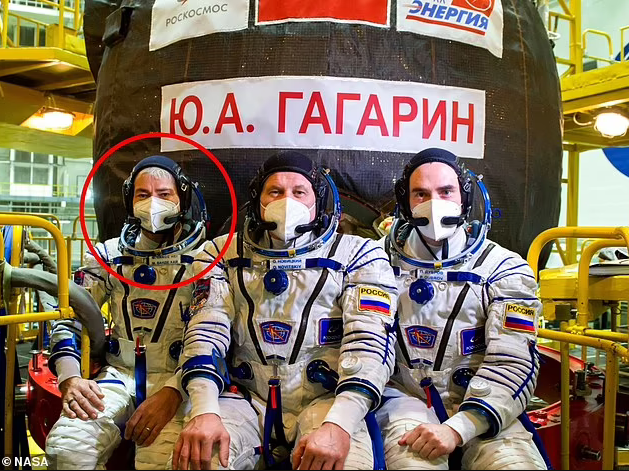 In a video posted by Russian state media outlet RIA Novosti, Russia’s space agency appears to have threatened to leave an American astronaut aboard the International Space Station as it crashes to Earth.

Mark Vande Hei, a married 55-year-old father of two from Texas, is expected to return to Kazakhstan on March 30 with two Russian cosmonauts onboard a Russian Soyuz spacecraft after nearly a year on board the International Space Station (ISS).

However, amid US sanctions against Russia for human rights crimes committed during its siege of Ukraine, Dmitry Rogozin, the president of Russia’s space agency Roscosmos, has threatened to launch himself into space.

He even took the time to make the terrifying video, which NASA Watch shared on Twitter.

It has upbeat music with the song Farewell as the two cosmonauts on board the International Space Station with Vande Hei wave him goodbye and remove Russia’s section of the station, which would send it plummeting back to Earth.

“The Roscosmos television studio jokingly demonstrated the possibility of Russia withdrawing from the ISS project the undocking of the Russian segment of the station, without which the American part of the project cannot exist.”RIA Novosti captioned.

Vande Hei’s mother Mary, 77, stated “It’s a terrible threat. When I first heard it I did a lot of crying. It’s very troubling. We are just doing a lot of praying. It is really a shame that it’s been politicized like this. It’s quite a shock. His wife, Julie, is very worried in Texas. It’s very hard for her right now.”

Thomas Kirkman, a physics professor at St. John’s University who previously taught Vande Hei as an undergraduate, said his work ethic, education, and military experience will help him deal with the escalating stress professionally.