US Confronts China Over Military Aid To Russia 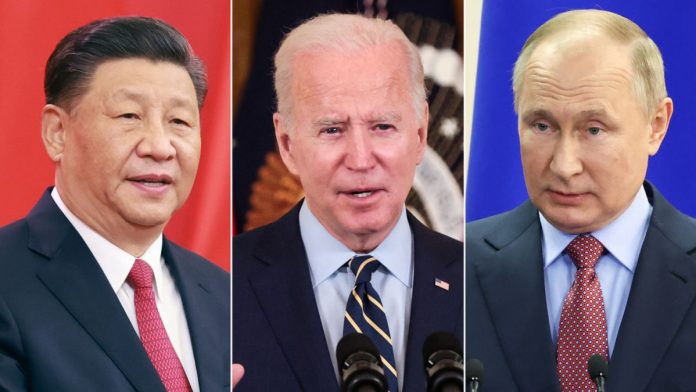 Jake Sullivan, White House National Security Advisor, confronted his Chinese counterpart Monday over the communist world power that supported Russia militarily as well as economically during its attack on Ukraine.

Sullivan sat in Rome with Yang Jiechi, China’s top foreign-policy adviser, as news broke of Moscow having reached out to China to help it out as it runs out of military supplies. This is despite fierce resistance from the Ukrainian troops.

Two officials from the administration told the Associated Press that the U.S. determined that China had signaled to Russia that it was willing to provide both military support to the campaign in Ukraine as well as financial support to offset the negative effects of the severe sanctions imposed on the West. Officials said the assessment was relayed earlier Monday to Asian partners and allies.

“Moscow has received a positive response from Beijing,” said one official, describing a diplomatic cable sent to U.S. embassies asking for them to inform their host governments of the information. The officials spoke on the condition of anonymity to discuss the sensitive information.

Sullivan stated during a seven-hour, “intense” meeting with Yang that the Biden Administration is deeply concerned about China’s alignment to Russia at this moment. Jen Psaki, White House press secretary, said.

Psaki declined to comment to say whether the U.S. believes China provided Russians with economic, military or other assistance.

The Sullivan-Yang meeting followed up on the Nov. 15, 2021, virtual meeting between President Biden and President Xi.

“Mr. Sullivan raised a range of issues in U.S.-China relations, with substantial discussion of Russia’s war against Ukraine,” the White House said in a statement.

Ned Price, the spokesperson for the State Department, confirmed that Yang was confronted by Sullivan about the reports.

”The national security adviser and our delegation raised directly and very clearly our concerns about the PRC’s support to Russia in the wake of the invasion, and the implications that any such support would have for the PRCs relationship not only with us, but for its relationships around the world – that includes our allies and partners in Europe and in the Indo-Pacific,” Price said, referring to China by its official name the People’s Republic of China.

Sunday’s interview with Sullivan revealed that the US had communicated to China “there will absolutely be consequences for large-scale sanctions, evasion efforts or support to Russia to backfill them.”

“We will not allow that to go forward and allow there to be a lifeline to Russia from these economic sanctions from any country, anywhere in the world,” Sullivan said Sunday on CNN’s “State of the Union.”

National Security Adviser @JakeSullivan46 tells @DanaBashCNN that possible Chinese support for the Russian economy is “a concern” for the United States. #CNNSOTU https://t.co/HRX1Sd1n7l

Dmitry Peskov, the spokesperson for the Kremlin, denied the allegations.

“No, Russia has its own potential to continue the operation, which, as we have said, is unfolding in accordance with the plan and will be completed on time and in full,” Peskov said.

China dismissed the reports and called them disinformation.

“What is pressing now is that all parties should exercise restraint and strive to cool down the situation, rather than fueling the tension,” China’s Foreign Ministry spokesman Zhao Lijian told reporters. “We should promote diplomatic settlements instead of further escalating the situation.”

The Communist-ruled nation is trapped between an alliance with Russia and the reality of losing key trading partners in the US or Europe.

The Biden administration is also accusing China of spreading Russian disinformation that could be a pretext for Putin’s forces to attack Ukraine with chemical or biological weapons. Biden officials say Beijing is spreading false Russian claims that Ukraine was running chemical and biological weapons labs with U.S. support. They say China is effectively providing cover if Russia moves ahead with a biological or chemical weapons attack on Ukrainians.

When Russia starts accusing other countries of preparing to launch biological or chemical attacks, Sullivan said Sunday, “it’s a good tell that they may be on the cusp of doing it themselves.”

Price called upon China to assist Russia instead of aiding Russia and to pressure Moscow to accept a ceasefire and stop its attack on Ukraine.

“It is fair to say that it is incumbent upon every country around the world to speak out clearly, to allow there to be no ambiguity in terms of where they stand,” he said.

”We’ve heard statements from the PRC that have somewhat of an ambivalent message, calling for a diplomatic solution. I read a statement the other day from a PRC official calling the situation complicated. There’s nothing complicated about this. This is naked aggression. This is a war of choice,” Price said.

The relationship between China and Russia, he said, has been growing warmer over the past few years, and their “vision of the world is in stark contrast to the vision that the United States and our allies and partners have not only built and promoted but the system that itself has advantaged countries like the PRC and Russia.”

Xi hosted Putin at Beijing’s Winter Olympics Games, as Russia was building thousands of troops along Ukraine’s borders. The two leaders then released a joint statement praising their “friendship” while agreeing to work together against the West.

China abstained also from the vote at the United Nations Security Council Feb. 25, condemning Moscow for its invasion, and has been reluctant to criticize Putin.

Price stated that both countries had rejected the rule-based system of government.

“This is very clearly a case of two autocracies with a desire to see a world that is more closed, that is less open, that is less free, come together in some ways, joining forces, and we’re watching very closely to determine the form that any such cooperation may take,” Price sai

A Port Wentworth police officer who discussed his biblical beliefs on Facebook and was subjected to harassment and even suspension, decided to...
Read more
Hot Topics

Another round of relief for Ukraine was paid for the US taxpayers. The United States revealed on Wednesday that...
Read more
Hot Topics

Joe Biden appeared to have another dementia-induced outburst while presenting an economic speech at a Town Hall meeting in Virginia on Thursday.
Read more
Hot Topics

Ukraine will have to wait months for the promised 31 M1 Abrams tanks since the Pentagon does not have enough of the...
Read more
Hot Topics

Due to Democratic policies, the sunsetting of Republican tax reforms, the anticipated increase in the corporate minimum tax for billion-dollar companies, and...
Read more
Hot Topics

As a result of medallion taxi drivers harassing and abusing Uber drivers and their customers on Monday, the US State Department issued...
Read more

A Port Wentworth police officer who discussed his biblical beliefs on Facebook and was subjected to harassment and even suspension, decided to...
Read more

Another round of relief for Ukraine was paid for the US taxpayers. The United States revealed on Wednesday that...
Read more

Joe Biden appeared to have another dementia-induced outburst while presenting an economic speech at a Town Hall meeting in Virginia on Thursday.
Read more

Ukraine will have to wait months for the promised 31 M1 Abrams tanks since the Pentagon does not have enough of the...
Read more

Due to Democratic policies, the sunsetting of Republican tax reforms, the anticipated increase in the corporate minimum tax for billion-dollar companies, and...
Read more